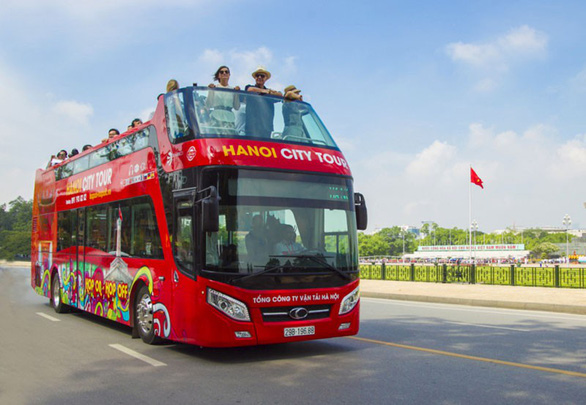 The Ho Chi Minh City Department of Transport has plans to trial a tour around the downtown area on open-top double-decker buses, a tourist activity that has been carried out in Hanoi since mid-2018.

The proposal came from the Vietnamtourism-Hanoi JSC, which said it would be in charge of implementing the pilot program if approved, according to the municipal transport department.

The Vietnamtourism-Hanoi JSC previously suggested that the first and final destinations of the bus tour be situated on Nguyen Hue Pedestrian Street.

The transport department, however, wanted the two terminals to be placed at the Municipal Theater, not too far from Nguyen Hue, which is a busy street.

The plan must also take into consideration the safety of people on the upper deck as electric and telecom wires along local streets have yet to be completely put underground, the transport department said.

While showing support for the plan proposed by Vietnamtourism-Hanoi JSC, the transport department fell short of elaborating on when the pilot program would be initiated.

Such a tour was officially launched in Hanoi in late May 2018, following a successful test run since July 2017.

The three buses run between 9:00 am and 5:00 pm every day on famous streets in the Vietnamese capital, passing 30 local places of interest like Hoan Kiem Lake, the Vietnam National Museum of Fine Arts, and the Hanoi Opera House.