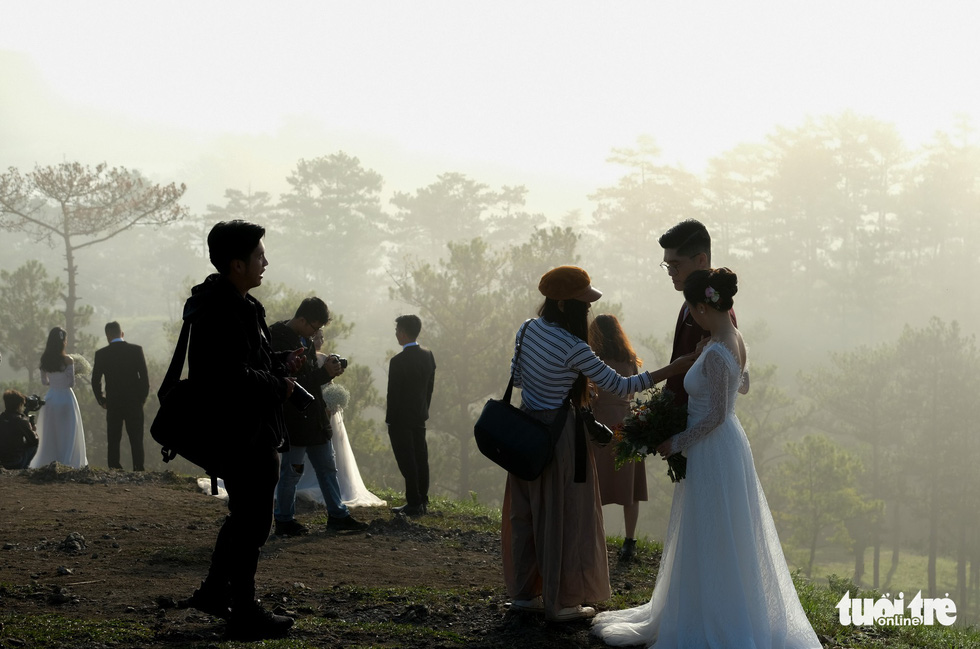 In Vietnam, wedding photo spot so popular couples line up daily for shoot

A hill with a picturesque view overlooking the misty green valley of Vietnam’s Central Highlands region attracts dozens of couples each day who hope to fill their Instagrams with the perfect wedding photos.

Located 13 kilometers from the center of Da Lat City in Lam Dong Province, ‘Lovebird Hill’ – unofficially named by locals due to its popularity among young couples – sits on the border separating Da Lat and neighboring Lac Duong District.

Each morning between 4:00 am and 7:00 am, just as the sun begins to rise over the rolling tree-topped hills and clouds of fog rise from the valley, hundreds of wives- and husbands-to be begin queuing for the best spots to capture their wedding photos.

“There’s hardly a day when there aren’t at least 30 couples here taking pre-wedding photos,” said Tran Phi Hung, the owner of a mobile takeaway coffee stand in the area.

During good weather or peak wedding seasons, that number can swell to 70-80 couples per day, Hung said.

“Every square meter here is occupied by at least one couple during busy times, so they line up for the best spots,” he added.

Hon, a professional wedding photographer who regularly takes his clients to ‘Lovebird Hill’ for wedding photos, said the secret to the place’s attractiveness lies in the multi-layered hills and mountains that make up its background.

“There is also a lot of rolling fog here, which makes for a stunning setting with a little bit of sunshine,” Hon said, adding that it is one of the rare spots left in Da Lat where one can take a landscape photo without too many greenhouses in sight.

Originally a summer hideout for French officials who built villas in the clear mountain air to escape the heat and humidity of the lowlands, Da Lat has since remained a popular getaway for those in southern Vietnam.

The most beautiful season to visit the city is from late October to March of the following year, known as the season of “wintry sunshine," when everything is bathed in a golden light that chills rather than warms.

One can find themselves lost in an other-worldly scene that takes over vast portions of the hills surrounding Da Lat and the nearby Lam Vien Plateau at the end of November, when pink grass is in season.