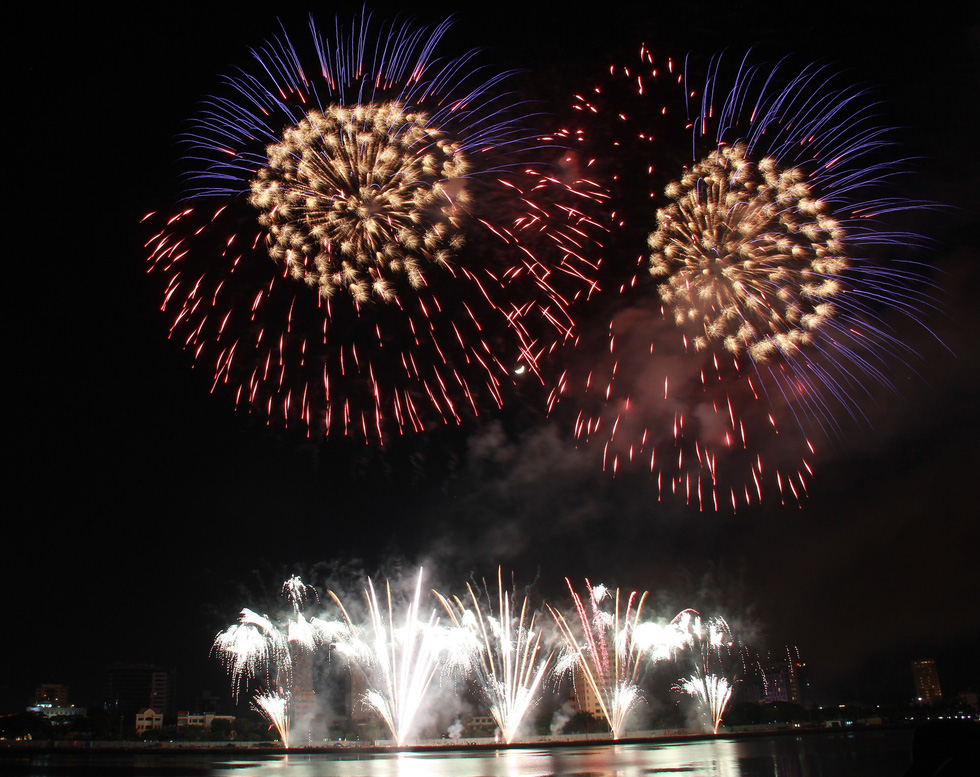 The second night of the Da Nang International Fireworks Festival 2019 (DIFF 2019) lit up the namesake Vietnamese city on Saturday with performances from first-time contenders from the Americas and Europe.

Running from June to July, DIFF 2019 is the tenth edition of the competition having been held annually in Da Nang since 2008, with its opening night being organized on June 1.

News Fireworks do Brasil from Brazil brought to DIFF 2019 a mesmerizing and colorful pyrotechnic show with new, unique, and various melodies.

The Brazilian team made its name with a fireworks show on New Year’s Eve in Copacabana in 2008 and was recognized by the World Record Academy as the biggest underwater pyrotechnic show.

According to the team leader Alessandra Zanotto, the use of many different colors represented the variety in races and origins of Brazilian people.

Under the theme "Stories by The Rivers," the team took advantage of blue and green.

Here are some photos of the News Fireworks do Brasil show:

While Belgian contestant H.C Pyrotechnics is also a first-time contender, it is by no means an easy target as the team won the first prize at Courchevel International Fireworks Festival last year.

Under theme “Rivers that Tell Stories," the Belgian team brought a performance named “Show of A Lifetime” inspired by the story of P.T Barnum from circus crew Barnum & Bailey.

H.C Pyrotechnics touched the hearts of the audience with a story of a man who dedicated his life to art by going from one country to another to perform.

The fireworks show impressed the Da Nang audience with colorful “waterfalls” and a crossette effect.

Here are some photos of Belgian contender H.C Pyrotechnics’ performance:

DIFF 2019, with the theme "Stories by The Rivers," features eight countries including Vietnam, Russia, Brazil, Belgium, Italy, China, the UK, and Finland.

The fest will run until July 6.

Every Saturday two teams from two different countries are going to perform.

At last year's festival, Team Marterello from Italy was crowned the champion.