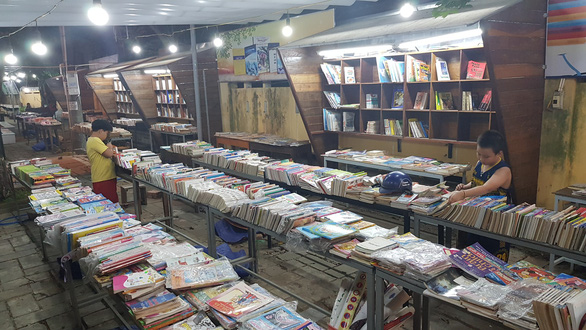 Hue book street to be closed for selling pirated books

A pilot project intended to create a space for bookworms in Hue, the capital city of the central province of Thua Thien-Hue, has evolved into a hub for pirated books and street food hawkers, according to disgruntled visitors.

As Hai Ba Trung Book Street moves further away from its original mission to promote reading in the ancient capital, the municipal administration has decided it is time to shut doors on the venue, barely a year after it was first inaugurated in May 2018.

With over 10,000 books for sale on the 100-meter-long strip, the book street was designed to inspire reading amongst local residents.

However, within months of its opening, city administrators began receiving complaints that the operator of the book street, C&C Company, had been selling counterfeit copies of books produced by prominent publishers such as Nha Nam, First News Tri Viet, and Tre (Young) Publishing House at its stall at the venue.

Upon receiving the reports, the municipal administration sent a multi-department inspection team to the book street to investigate the operation and eventually found that C&C was unable to provide relevant documents to prove the origins of 33 publications on sale at the venue.

The inspection team confiscated the books in question for further investigation and summoned C&C to a working session. No C&C representatives showed up for the meeting, however.

In addition, the inspectors found that C&C failed to follow a number of other guidelines set for the project by the Hue People’s Committee.

Authorities also noted that a drink stall and pottery service that were operating at the venue were a hindrance to the reader-friendly atmosphere of the book street.

It did not give a specific date for the closing.

The failure of the Hue book street is another disappointment added to the growing list of failed attempts to recreate the successful Nguyen Van Binh Book Street in District 1, Ho Chi Minh City.

Like the Hai Ba Trung Book Street in Hue, the Ba Cu Book Street, which was launched in the southern province of Ba Ria-Vung Tau in December 2017, attracts few visitors.

Even in Hanoi, the millennia-old capital dubbed the beating heart of Vietnamese culture and tradition, a book street is not doing any better, with few visitors making the trip to the venue, located on Dinh Le and Nguyen Xi Streets in Hoan Kiem District.