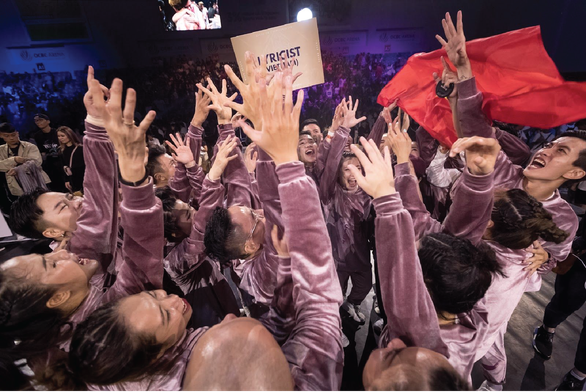 Lyricist scored 19 out of 20 points, the highest among all 15 regional teams competing at the Singaporean government-backed dancing contest’s ASEAN Championship night on August 4.

The Vietnamese team impressed judges and spectators at the 3,000-seat OCBC Arena with a special performance conveying a meaningful message - 'Be yourself.'

In her comment, Larkin Poynton, one of the four judges, praised the performance of the Vietnamese dancers, acknowledging that it is not easy to do such an elaborate and emotional routine in just 90 seconds.

Vietnam had regularly participated in Super 24 since its introduction in 2012, but this is the first time a Vietnamese team has triumphed in the competition.

“I hope that Lyricist’s victory will inspire the next generations of Vietnamese dancers to take to international stages and show the world their talent,” said choreographer Alexander Tu, founder and manager of Lyricist.

Founded seven years ago, Super 24 has been annually organized by the performing arts center and social enterprise O School, in cooperation with the Singaporean government, with an aim to continue the city-state’s culture via the development of performing arts.

As the name suggests, Super 24 requires each team to comprise 24 members performing a 90-second routine within an eight-by-eight-meter square dance floor in four categories - primary, secondary, tertiary, and open.

From its humble beginning as a small urban dance competition to Singapore’s most unique of its kind, Super 24 has grown to attract the largest number of participants with 73 teams from all over Southeast Asia registering for the qualification round in its eighth edition this year.