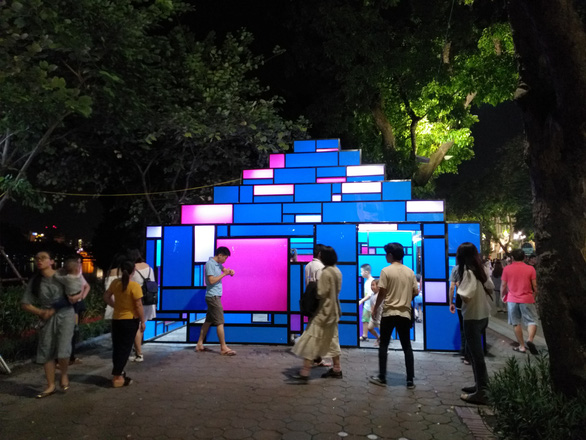 From work of art to wash closet: Hanoi art installation dismantled due to human waste

An art installation on the banks of Hanoi’s iconic Hoan Kiem Lake was dismantled by authorities on Wednesday afternoon, weeks earlier than scheduled, following complaints that too many visitors to the area were using the structure as a wash closet.

The pyramid-shaped artwork, titled ‘Thap’ (Tower), was one of six installations set up near the lake by a group of six artists and architects in celebration of the 65th anniversary of Hanoi’s Liberation Day (October 10).

'Thap' was built from plastic with a maze inside inspired by the works of Dutch painter Piet Mondrian and had been on display since before October 10, according to sculptor Mai Thu Van, one of the artists behind the project.

On Wednesday, however, the smell of urine left behind by those who chose to use it as a restroom became so strong that it had to be disassembled.

The other five installations are still intact.

In a discussion with Tuoi Tre (Youth) newspaper, Van said that she is extremely unhappy with the situation, but also thinks it is important to find ways to educate the public about respecting public art.

Van also noted that this is not the first time her artwork has been vandalized.

According to the sculptor, some of her large artworks were damaged when they were put on public display near the lake last year.

“It is really difficult to display artwork in public in Vietnam,” Van complained.

“The take-away from this is that artists should probably avoid creating works with enclosed spaces for public display,” Pham Tuan Long, vice-chairman of Hoan Kiem District, joked with Tuoi Tre.