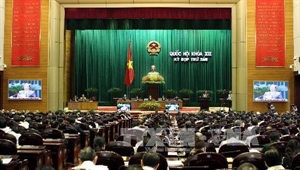 According to a report about the group debate on the issue on previous days, the majority of deputies support the stipulation on the position and leading role of the Communist Party of Vietnam as stated in Article 4 of the draft revised constitution. Most deputies also said they agree to keep intact Article 10 on the trade union organization and other provisions on trade union’s involvement in inspecting and monitoring the operation of State agencies, organizations and enterprises.

During the session, which was broadcast live on national radio and television, the deputies continued to give their opinions and comments on several important contents in the draft revised constitution, including human rights, essential rights and obligations of citizens, the National Assembly, the National Election Council and the State Audit Office. Ha Van Thuong, former Chairman of the Thanh Hoa provincial chapter of the Vietnam Fatherland Front (VFF) Central Committee proposed that more attention be paid to the role of the front and socio-political organizations to promote democracy.

Deputy chair of the Thua Thien Hue Bar Association Lawyer, Dang Thi Ngoc Hanh, said she agrees with the structure, wording and content of the draft document, which she said has clarified the role and nature of the State.

Hanh, however, pointed out some repetitions in Article 4 on the Communist Party of Vietnam and proposed that they should be revised.

Le Van Minh, former head of the Planning Office under the HCM City Department of Fisheries, said the draft amendments contain many new and progressive contents that better suit actual conditions of the country.

Today, November 6, legislators are scheduled to debate the revised Land Law and hear a report on amending the Laws on Construction, Environmental Protection, Marriage and Family, and Health Insurance.