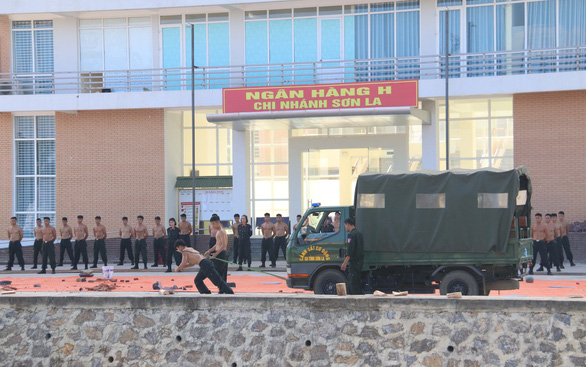 Police forces in the northern Vietnamese province of Son La have conducted a drill for anti-terrorism, hostage rescue, and other operations that could happen during the COVID-19 pandemic.

The drill, with the coordination of the provincial Military Command, took place on Monday, based on scenarios of combating terrorists, rescuing hostages, mine clearance, firefighting, and salvage.

The scenarios were designed to include incidents conducted by terrorists and saboteurs attempting to take advantage of the pandemic spread in many areas of Vietnam.

One of the assumed incidents was that reactionary individuals and organizations at home and abroad, supported by hostile forces, might carry out sabotage and terrorism activities.

Another fictional scenario was hi-tech criminals conducting attacks on a bank’s database systems to take control of its clients’ accounts and appropriate money from them.

Other scenarios include hostage situations, explosives, and arson that require effective response from local police.

In the 45-minute drill, local police forces, including a mobile police battalion, fought and seized terrorists and saboteurs, rescued hostages, stamped down fires, evacuated people from dangerous areas, searched for and removed explosives, and restored order and security.

They also completed necessary steps that serve the handling of terrorist acts and other crimes in accordance with the law.

Before this large-scale drill, the provincial police had taken part in a defensive exercise that took place in three stages: putting forces into the state of readiness for fighting; making defensive preparations; and performing combat actions.