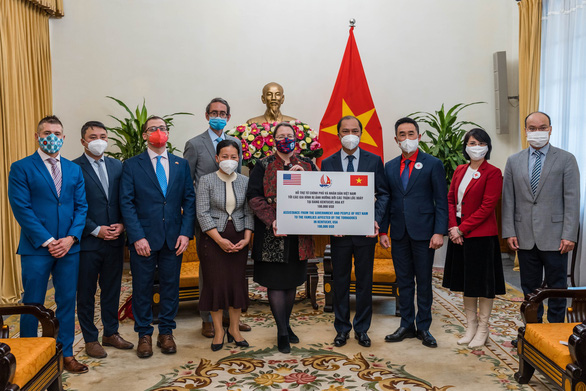 A ceremony was organized in Hanoi on Wednesday to hand over US$100,000 from the Vietnamese government and people to the U.S. Embassy as support for the families whose members died in the tornadoes that hit Kentucky State in December.

Speaking at the event, Vietnamese Deputy Minister of Foreign Affairs Nguyen Quoc Dung expressed his belief that the U.S. government and people would overcome the consequences of the disasters soon under the leadership of President Joe Biden.

Dung also highlighted the friendship, cooperation, and mutual support between the two governments and peoples to overcome difficulties, especially in the context of the COVID-19 pandemic that has raged around the world for more than two years.

She also wished that the good bilateral relations between the two countries would continue to develop, including the effective cooperation between their Red Cross Societies.

The U.S. Embassy said on its verified Facebook account on Wednesday that the U.S. was deeply grateful to the government of Vietnam and the Vietnam Red Cross for its donation to the American Red Cross, in support of those affected by deadly tornadoes in Kentucky.

“This is reflective of the deep connection between the people of the United States and the people of Vietnam – which is the foundation of our partnership,” the embassy said.

At least six states, including Arkansas, Illinois, Kentucky, Missouri, Mississippi, and Tennessee, were hit by tornadoes from the midnight of December 10 to early December 11, according to the U.S. National Weather Service.

The tornadoes left trail of devastation across the six states and killed at least 92 people, with Kentucky being the hardest hit.

Vietnamese State President Nguyen Xuan Phuc and Prime Minister Pham Minh Chinh on December 12 sent their condolences to President Joe Biden and the families of the victims affected by the natural disasters.

On the occasion, President Phuc and PM Chinh thanked the U.S. government for having donated to Vietnam more than 24 million doses of COVID-19 vaccine, which has made the U.S. the biggest vaccine donor to the Southeast Asian country so far.