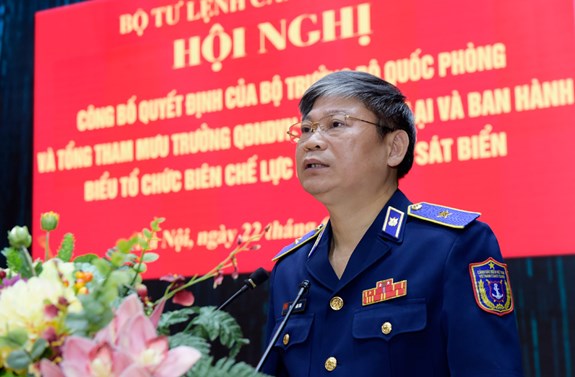 Lieutenant General Nguyen Van Son, former commander of the Vietnam Coast Guard, and six other senior officers of the force have been detained for their involvement in an embezzlement case, the Ministry of National Defense has announced.

All the detainees have been prosecuted on charges of ‘asset embezzlement’ under Article 353 of the Vietnamese Penal Code, investigators said.

The related arrest warrants and prosecution decisions had been approved by the Central Military Procuracy.

All the seven were all removed from their Party positions in October last year, after the Party Central Committee’s Secretariat concluded that the Standing Board of the VCG Party Committee in the 2015-20 tenure had seriously violated the principle of democratic centralism and the principle of self-criticism, working regulations, and regulations of the Central Military Commission.

Such violations have resulted in a degradation of political virtues, ethics, and lifestyles among certain officers, the Secretariat stated.

The board also showed a lack of responsibility, loosened leadership and supervision, and violated the Party’s regulations, the State’s laws and the Defense Ministry’s regulations on finance, investment, equipment procurement, and anti-smuggling, causing very serious consequences.

These violations led to significant losses of assets to the State, affected the prestige of the Party and the army, and gave rise to concerns among officers and soldiers, the Vietnam News Agency cited the Party Central Committee’s Inspection Commission as saying.

The Central Military Commission has directed military judicial agencies concerned to expand their investigation to identify and verify violations, if any, of organizations and individuals involved.