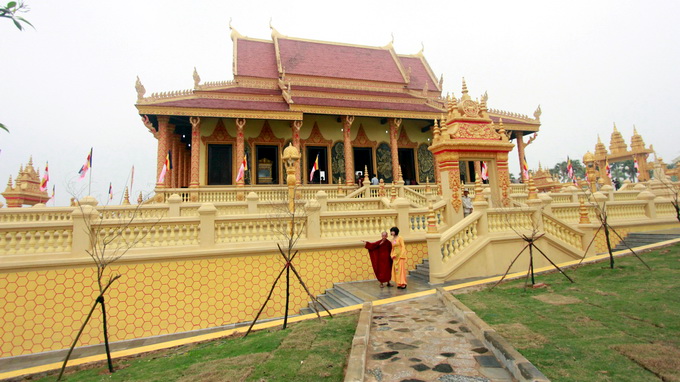 The pagoda, located in the Vietnam Peoples’ Culture Village, is modeled after  K’Leang pagoda in the Mekong Delta and built on an 0,8 hectare plot.

The pagoda complex comprises of a main hall, altars, a cremation area, a tower-filled garden and a “ngo” boat house. “Ngo” boats are Khmer people’s iconic long, narrow boats, which are richly colored and ornately decorated.

The items are located at different heights and link to one another with a system of balconies. The roofs are tiled and boast intricate Khmer details.

During the inauguration ceremony, two significant rituals in southern Khmer culture were solemnly performed by the monks and nuns and Buddhists.

The majority of the Khmer population in Vietnam live in the southwestern region, particularly Soc Trang and An Giang provinces,  which is home to around 453 Khmer pagodas.