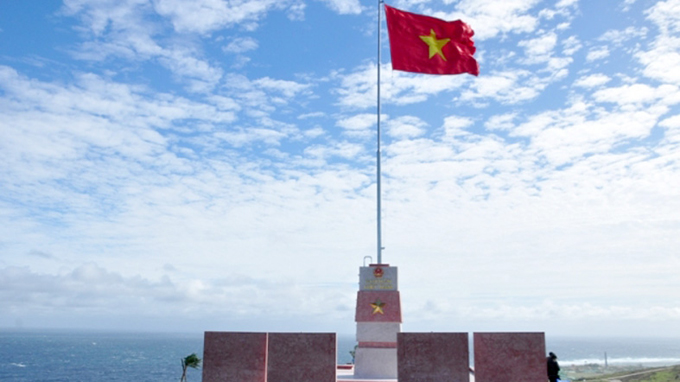 A national flagpole looking towards Hoang Sa (Paracel) archipelago in the East Sea was inaugurated on Ly Son island off central Quang Nam province on Monday.    The 20m flagpole was built at a cost of VND850 million (around US$40,000), of which VND700 million was granted by the Bank for Investment and Development of Vietnam. The remaining amount was contributed by students across the country through the Vietnamese Student Association (VSA). The flagpole is located on Thoi Loi Mountain, the highest mountain on the island that is an offshore district of Quang Ngai. The front of the flagpole’ base, made of steel-reinforced concrete, faces Hoang Sa archipelago.  The base is five meters high, on which the co-ordinates of the flagpole are written, emulating a sovereignty landmark. Behind the flagpole are four panels embossed with images of flames based on the logo of the VSA.        The inauguration ceremony was conducted by the VSA, the Vietnamese Student Development and Support Center, Quang Ngai’s Ho Chi Minh Communist Youth Union, and the provincial Students’ Association. As part of activities for the “Students and the Fatherland’s Seas and Lands” program, the flagpole not only contributes to confirming national sea sovereignty, but also helps educate young people on the importance of protecting their nation’s sea and islands, Deputy Secretary of the Quang Ngai Communist Youth Union Central Committee Nguyen Hoang Hiep said at the event. On the occasion, Hanoi’s Ho Chi Minh Communist Youth Union granted a solar power supply system, valued at VND200 million (US$9,600) to Ly Son Island District. The system will be used to light the area around the flagpole. Meanwhile, the VSA offered VND500 million to the provincial Ho Chi Minh Communist Youth Union for the construction of a primary school in Tu Nghia District, and the Vietnamese Student Development and Support Center granted 10 scholarships worth VND1 million each to poor students on the island.      In addition, 158 national flags have also been sent to Ly Son’s Ho Chi Minh Communist Youth Union.