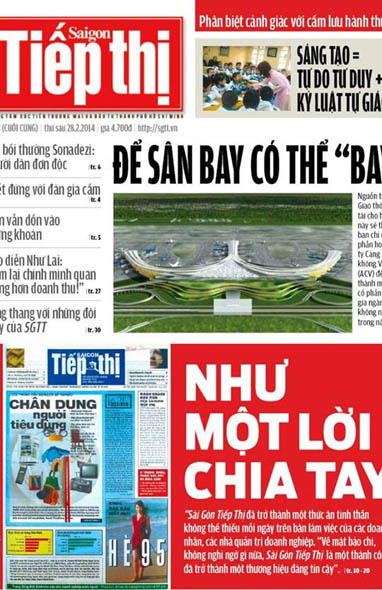 The Ministry of Information and Communications on Feb 26 withdrew the newspaper’s permit upon a decision issued by the city’s People’s Committee to merge the paper with the Saigon Times Group due to financial difficulties.

The Saigon Times Group, the parent firm which manages several publications including the English-language Saigon Times Weekly and Daily, will use Saigon Tiep Thi’s brand name to issue a new publication under the same name three times a week.

This means that Sai Gon Tiep Thi from now will be managed by the HCMC Department of Industry and Trade, which runs Saigon Times Group, instead of the Investment and Trade Promotion Center, which is managed by the city’s People Committee.

According to Tran Minh Hung, deputy editor-in-chief of the Saigon Times Group, the new Sai Gon Tiep Thi paper will be published on a regular basis, with the first edition coming out on March 3.

The paper’s new office will be based at the Saigon Times Group’s headquarters, on 35 Nam Ky Khoi Nghia, district 1. Its old office will be sold to pay its debts.

Hung added that the new Sai Gon Tiep Thi paper will remain the same regarding its layout and paper size. It will also feature favorite columns and articles by the old paper’s well-loved journalists.

Just like the old paper, the new Sai Gon Tiep Thi will also aim at providing local readers, consumers and producers with abundant information on trading and consumer goods and services.

The old paper’s editor board will move to the  Investment and Trade Promotion Center, while many of its journalists and staff have yet to find jobs with other newspapers. Only a limited number of the reporters are re-recruited to work with the new Sai Gon Tiep Thi paper.

In late December 2013, the old Saigon Tiep Thi staff unanimously filed a letter to the leaders of the HCMC People’s Committee, requesting that the merging decision be annulled. They stated that they were willing to tolerate delays in salaries and royalty payments as long as their newspaper could survive another three to five years under the management of the Trade and Investment Promotion Center.

The old Sai Gon Tiep Thi released its first edition in Apr 1995 and was run by the HCMC’s former Department of Culture and Information. The paper merged with the Saigon Times Group one year later before splitting in 2004.