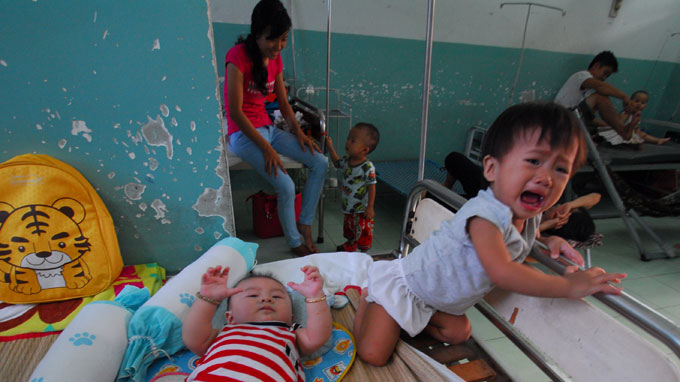 HFMD may reach epidemic level in Vietnam hub this year

Ho Chi Minh City health authorities have warned that the number of hand, foot, and mouth disease cases has sharply increased and that the disease may become an epidemic in the near future.

Dr. Nguyen Huu Hung, deputy director of the HCMC Health Department’s Preventive Health Center, issued the warning in a recent meeting with health centers from 24 districts of the city. According to the center, 3,373 HFMD cases were reported in the city in the year to May 9, up 28.3 percent year on year.  The disease has spread to 236 out of the 332 wards, communes, and towns across the city, the center said.

At Pediatrics Hospital 2, 8,688 children with HFMD were examined in April. Of this number, 478 children received in-patient treatment, double the number of patients in March, Dr. Trinh Huu Tung, head of the General Planning of the hospital, said.

In the first 11 days of May, the hospital examined 2,904 children with HFMD, 194 of whom were hospitalized.   At Pediatrics Hospital 1, Dr. Truong Huu Khanh, head of the Infection Department, said the infirmary has received 60-70 children with HFMD per day over the past several days. Meanwhile, during the first four months of this year, only a little over 2,000 children with HFMD were admitted to the institution for treatment--less than 20 cases per day, said Dr. Le Bich Lien, deputy director of the hospital.  In fact, the number of children with HFMD has steadily increased since February 2014 and will continue to rise, Dr. Lien said. Nationwide, the disease has spread to 62 of the country’s 63 localities, affecting more than 17,400 people and killing two as of May 13, the Ministry of Health announced.Precaution The disease is characterized by a fever and a rash that most frequently appears on the palms of the hands, soles of the feet, and inside the mouth. In Vietnam the most common strain is Enterovirus 71 (EV-71), which causes sores in the mouth and blisters on the hands, feet, knees, and buttocks, according to the Health Ministry’s Preventive Health Department. The ministry has requested that authorities at all levels make the following information known to the public: the disease can be transmitted through digestive tracts; there are no vaccines or specific medicines to combat the disease; children under five years old are most vulnerable; and the main preventive measures are following hygienic practices in eating, drinking, and living. In Vietnam, HFMD occurs throughout the year in most provinces in the country, but the disease is more prevalent from March to May and from September to December every year. Most of HFMD cases are mild, but in some cases the disease can cause dangerous complications such as encephalitis, meningitis, myocarditis, and acute pulmonary edema. These conditions may lead to death if not treated properly or in a timely manner.