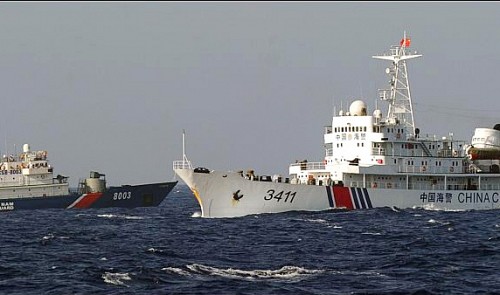 The new rig is dispatched against the backdrop that Beijing has unlawfully positioned the Haiyang Shiyou 981 oil rig in Vietnamese waters since May 1.

That means the Nan Hai Jiu Hao rig, which is owned by China National Offshore Oil Corporation (CNOOC), has departed from China’s Hai Nan Island and its destination will be an area off the mouth of the Gulf of Tonkin, Major General Dam said.

Vietnam and China are negotiating to fix a line to delineate the maritime boundary between the two countries in this gulf.

It is unknown how long the second rig will be placed in the East Vietnam Sea, according to ifeng.com, a news website of Hong Kong-based Phoenix Television.

Based on the coordinates provided by the MSA, the expected destination of the new rig is 50-60 nautical miles inside China’s continental shelf, Major General Dam said.

Such a location is 130 and 140 nautical miles from Vietnam’s Con Co Island and Ly Son Island, respectively, he added. China used to plant three or four drilling rigs there five or six years ago, the official added.

The rig was built at Daewoo Shipbuilding & Marine Engineering in the Republic of Korea in 1988.

The platform is 100 meters long and 78 meters wide and weighs 21,714 tons. It moves at four nautical miles per hour, the MSA said.

China has illegally maintained this oil rig in Vietnamese waters despite Vietnam’s repeated demand that it withdraw the rig and escorting ships immediately.Like us on Facebook or follow us on Twitter to get the latest news about Vietnam!