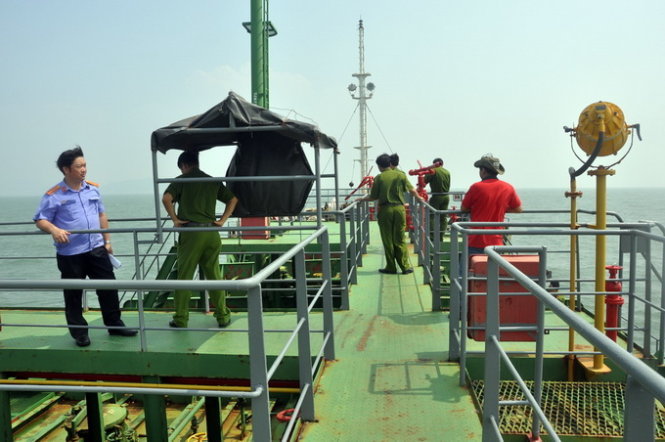 In an attempt to verify the authenticity of the reported hijacking of oil tanker Sunrise 689 on October 2, police collected testimonies from sailors, re-examined the ship but did not find the black box.

>> Police verifying reported hijacking of tanker Sunrise 689 amid rumor of staging >> Pirates steal 2,000 tons oil from Vietnam’s Sunrise 689 tanker >> Vietnam Coast Guard begins probe into hijacking of oil tanker Sunrise 689>> Captain of hijacked Vietnam oil tanker recalls horror of attack The ship, with 18 crew members on board, returned to the coastal southern city of Vung Tau on October 11 after the ship’s captain reported to authorities that the ship had been hijacked on October 2 and released by pirates on October 9. The piracy occurred when the Sunrise 689 was transporting 5,226 tons of oil from Singapore to the central province of Quang Tri, the captain said. After coordinating with the Vietnam Coast Guard to conduct initial investigations, the Ba Ria-Vung Tau Province Border Guard on Wednesday handed over the case to the Ministry of Public Security’s Investigation Agency. The hand-over took place amid suspicion that the piracy did not actually occur and was staged by the crew members who, according to rumors, stole the petrol. Upon receiving the case, the agency on Thursday re-examined the whole tanker and found its black box – a device that records information about the performance of a ship or an aircraft during its journeys – had gone. The ship’s owner, Hai Phong Fishery Shipbuilding Co., Ltd., also confirmed the loss, and some sailors said the pirates could have taken the black box away. The ship’s crew earlier reported that the pirates assaulted several sailors, destroyed all means of communication, and stole 2,000 tons of oil. Police have collected testimonies from the ship’s captain, Nguyen Quyet Thang, and all the other 17 crew members. A representative of the ship’s owner, arrived in Vung Tau on October 15 to provide information to investigators at their request. Sailors told investigators that the pirates destroyed telecommunication equipment and stole the black box to avoid being detected. In an interview with Tuoi Tre on Monday morning, captain Thang rejected a rumor that the hijacking was staged.  “I heard about such suspicions yesterday… People can think as they like, but the truth will be proved by police,” Thang said. He added, “The staging is not possible. My crew members and I would never risk our career by staging a hijacking.”Issues to be clarified Before the case was handed over to the Ministry of Public Security, Tran Cong Hieu, Commander of the Ba Ria-Vung Tau Border Guard, told Tuoi Tre on Monday that initial results of the investigation showed that there are signs that criminal acts took place on the ship, but four issues remain unclear.

First, there is inconsistency among the statements given by crew members. This may be the result of the unstable psychological state of the sailors, the official said.

Second, the exact location of the hijacking has not been determined.

Third, details related to the oil carried by the tanker remain unconfirmed. This is necessary to determine whether the actual oil matches the oil specified in the bill of lading for the goods.

And the last issue of what the pirates took from the sailors has yet to be determined, Colonel Hieu said. Meanwhile, the ministry’s investigation agency on Thursday said it is collecting further information and evidence related to the reported hijacking and trying to have an initial conclusion at the soonest time possible.