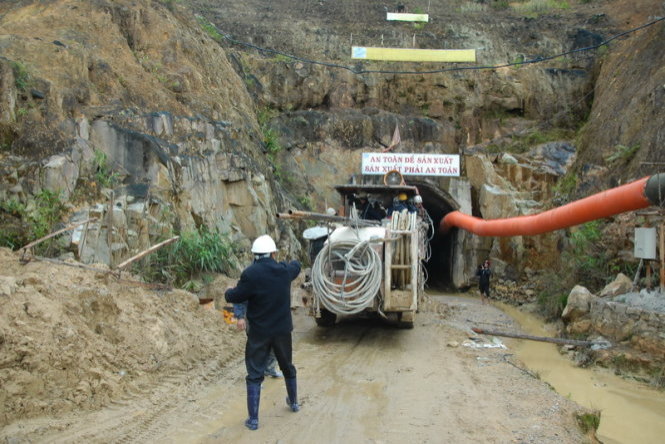 After hours of effort, Vietnamese rescuers on late Tuesday evening confirmed that 12 people trapped in a tunnel collapse accident at a hydropower plant on the morning of the same day remain alive.

>> Rescuers struggle to save 11 trapped in Vietnam tunnel collapse The victims-- numbered 12, not 11 as previously reported by media -- are expected to be freed within today, December 17, rescuers said. The accident occurred at 7:15 am on Tuesday when a 20-meter-long section of the under-construction tunnel of the Da Dang-Dachomo hydropower plant in Lac Duong District, in the Central Highlands province of Lam Dong, collapsed. Right after the incident, provincial authorities mobilized more than 200 firefighters, rescue workers, traffic police and medical staff to join the rescue mission. At 8:30 pm rescuers heard cries for help from inside the collapsed tunnel section, which was 500 meters from the tunnel’s opening. Rescuers had earlier drilled through rock to pump air into the tunnel in a bid to save the trapped people.      Doan Van Viet, chairman of the provincial People’s Committee, was present at the scene to direct and coordinate rescue efforts. Vu Tuan Anh, chief of district police, said the 12 victims are aged 25 to 30 and come from the central province of Nghe An and the northern province of Ha Nam.

At 8:55 pm rescuers pumped milk and ginger-mixed water into the tunnel through a 6-cm wide pipe to feed the trapped workers, while the drilling to create space to reach the victims and get them out continued. Five minutes later, rescuers communicated with the workers, who said they were alive but were very hungry.

At 10:30 pm sausages were sent into the tunnel. At11:45 pm, Colonel Hoang Cong Thao, head of the Fire Prevention and Control and Rescue and Salvage Police Department of the province, said, “Through communications made through the pipe, all the 12 victims are alive. We are very happy and are continuing efforts to get them out as soon as possible.” At 1 am Wednesday, December 17, chicken porridge was transmitted into the tunnel for the victims, who later confirmed they had received the food. They also said they had been asleep when the food came. The drilling to get into the collapsed section continued while the provision of food to the victims was maintained through the pipe. At 8 am, a rescue team was sent into the tunnel to search for the victims, Colonel Thao said.

Prime Minister Nguyen Tan Dung and State President Truong Tan Sang have asked concerned agencies to take all possible measures to get the trapped victims out of the tunnel as soon as possible.