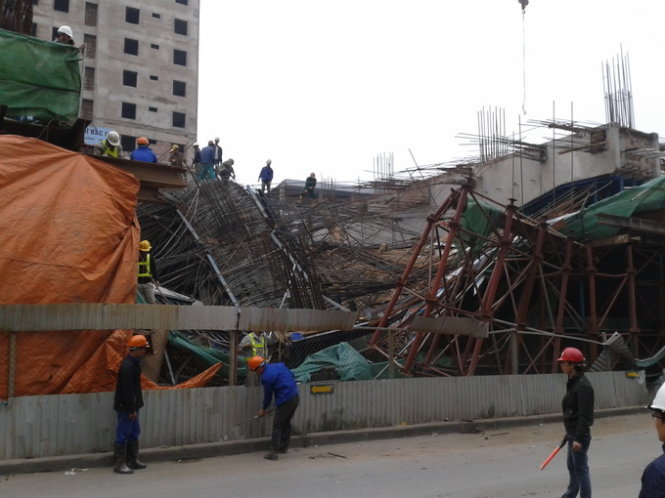 A serious scaffold collapse happened, again, early Sunday at a construction site of a flyover project contracted by Chinese businesses. The project resumed in mid November after reels of steel fell off another of its construction site, killing one and injuring two others.

The incident happened around 4am on Sunday at Ha Dong Terminal on Tran Phu street, which is part of the Ha Dong- Cat Linh flyover project.

The scaffold, which measured some 10 meters in length, gave way completely.

A taxi which was carrying three passengers was trapped in the steel rubble as it was driving in the area at the time of the collapse.

The driver and passengers managed to get out unharmed.

The Ministry of Transport’s representatives said relevant agencies are looking further into the cause of the collapse.

On November 6 this year, bulky reels of steel fell off from the construct site of Thanh Xuan 3 terminal under the same flyover project, killing one motorcyclist and injuring two others.

The transport ministry suspended the implementation of the project shortly after that, and the project was not allowed to resume until November 14.

The Cat Linh – Ha Dong rapid transit railway project was originally expected to require an investment of US$552 million, according to its management board. China would contribute $419 million of the sum via ODA loans, while Vietnam would cover the remaining $133 million.

The Vietnam Railway Authority is the project’s investor while China Railway 6th Bureau Group Co Ltd has been assigned to be its EPC contractor.

The project aims at building 13km of elevated railways that enable trains to travel at speeds ranging from 35km per hour to 80km per hour. The whole journey from Cat Linh to Ha Dong stations is expected to take 24 minutes.

There will be 12 overhead stations and a fleet of 13 trains, each having four cars collectively capable of carrying 1,200 passengers a time. The trains will be designed to come every two minutes and be able to transport 1.02 million passengers a day.

The project was scheduled to get started in November 2008 and reach completion five years later, but it only broke ground in the capital city in October 2011.

It was then due for completion in June next year, but only if the site clearance task was finished last year, a condition that was eventually not fulfilled.

The project came under scrutiny in late April this year over a $339 million cost overrun.

Its management board has recently sought permission from the transport ministry to increase its total investment to roughly $868 million due to additional expenses.