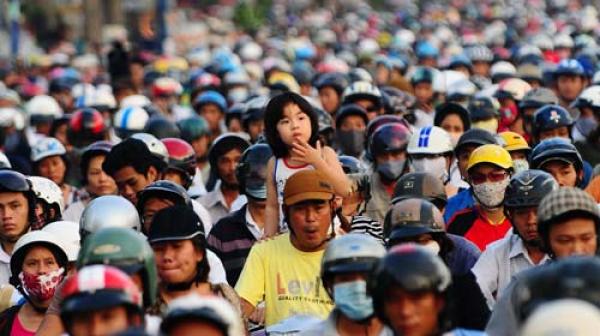 Anyone who wants to buy a car is required to prove that he/she already has parking for their future vehicle, according to one of a number of unusual solutions proposed by a state agency in Ho Chi Minh City to restrict the number of private vehicles.

Moreover, along with the money an owner spends to buy a car, he/she must pay all the related premiums, taxes, and fees, according to a proposal from Ho Chi Minh City’s Department of Transport (DOT) recently submitted to the HCMC People's Committee.

In particular, car owners must pay for the auction to win the right to let his/her car use the street, according to the DOT’s proposal, which includes a series of measures to restrict the ownership and use of private vehicles in order to develop appropriate methods of transport in the city.

In addition, DOT said the city’s government should apply measures such as an increase in the excise tax on personal vehicles, registration and environmental fees to restrict private vehicles, especially cars.

HCMC is struggling to limit personal vehicles to tackle increasingly serious traffic congestion during peak hours across the southern city.

Besides, the proposal also covers limitations on the ownership and use of new motorbikes.

Specifically, DOT proposed that the city’s government create regulations for the life cycle of motorbikes in the city to limit the number of vehicles in traffic and reduce congestion and environmental pollution.

At the same time, the city should build up technical standards for the registration of new motorcycles to keep those which do not meet the norms off the streets.

Along with the above solutions, the DOT also proposed the use of economic sanctions, such as gasoline taxes, road usage and road parking fees to reduce travel by private cars as much as possible.

Moreover, there should be more charges like fuel taxes, charges for entering/exiting the city center, increased service charges at parking facilities around the city; and limited personal vehicle traffic on major roads or on a certain number of routes during peak time, said DOT.

In addition, based on the license plate, there should be restrictions on driving in some areas on certain days of the week to reduce the number of cars used there. This method can be applied to a certain number of vehicles in certain areas at a specific time of day or during the whole day, said DOT.

According to the latest statistics, Ho Chi Minh City has nearly six million motorbikes and more than 500,000 cars, accounting for one-third of cars nationwide.

According to the national plan on road transport development for Vietnam to 2020 and orientations to 2030, it is expected that by 2020 there will be about 2.8 to three million automobiles, of which personal cars may account for about 50 percent.

The Ministry of Transport in late 2013 submitted to the government a proposal on limiting personal vehicles, especially in the five biggest cities of Vietnam - Hanoi, HCMC, the central city of Da Nang, northern Hai Phong and the Mekong Delta city of Can Tho.