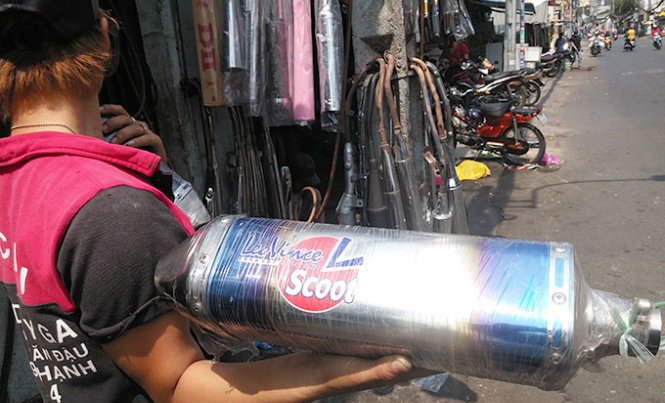 Drivers and locals living along streets in Ho Chi Minh City have been ‘tortured’ by the deafening noise of modified tailpipes on motorbikes for a long time, and it has even caused traffic accidents since drivers may be startled by the sound.

However, the punishment for creating such noise is still mild and fails to prevent it from recurring.

Motorbikes with large engines and original twin discharge systems can also create sudden big noises, startling other drivers and thus leading to accidents on busy streets in the city, especially during rush hour.

But traffic regulations and laws now only ban motorbike horns in certain areas such as the vicinity of hospitals and schools, failing to prevent exhaust noise from panicking others.

“You just need to install a special tailpipe or modify your current exhaust and you can make big and sudden noise.

“On crowded streets, you just need to rev the engine to terrify other drivers and they will give way so you can speed up,” said a driver of a motorbike with a large engine while he was selecting a modified tailpipe at a shop on Duong Tu Giang Street in District 5 in Ho Chi Minh City.

Tran Thi Nam said she once jumped out of her skin because of the noise of a motorbike following her on Duong Quang Ham Street in Go Vap District after the Lunar New Year (Tet) holiday, which wrapped up last month. Nam said she immediately turned right on the roadside and stumbled and fell down on a rock.

The driver that caused the noise just sped up and drove away fast, she recalled.

“I am using an original Austin tailpipe that costs VND12.5 million [US$584] but I need to modify it for bigger noise,” said a young man riding a 1,000cc Kawasaki Z1 motorbike last weekend when he was choosing a modified exhaust for his bike on Nguyen Hong Street in Binh Thanh District.

“I just need to rev the engine and other drivers will give way on busy streets.”

Each modified exhaust pipe costs from VND2 million ($93) to tens of millions of Vietnamese dong.

A tailpipe modified to be installed on a normal Honda motorbike such as a Dream or Wave costs only VND200,000 ($9).

Colonel Tran Thanh Tra, head of the traffic police unit of the Ho Chi Minh City Police Department, said any unlicensed modification to a motorbike is illegal and can result in a fine of VND100,000-200,000 ($4.7-9.3).