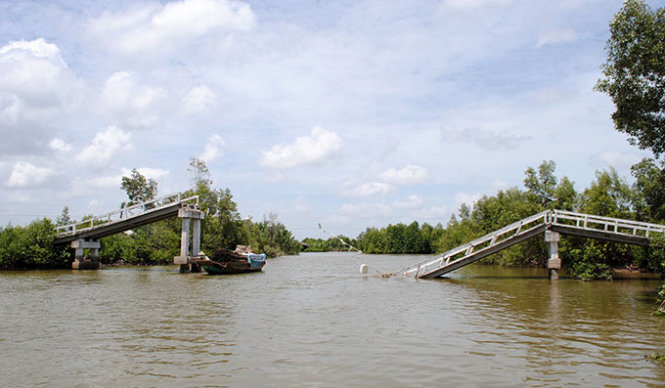 Poorly built bridges at risk of collapse in southern Vietnam

Many bridges built under a rural transport program in the Mekong Delta province of Ca Mau since 2009 have collapsed, been damaged or left unused due to poor construction quality.

Nguyen Thanh Su, vice head of the infrastructure unit in Ngoc Hien District, admitted many of the bridges were damaged because no geological surveys were conducted before construction began to save costs.

Bridge pilings that are not long enough and placed on weak foundations may have led to the damage, he added.

Two spans of Kenh Coc Bridge in Dat Moi Commune of Nam Can District collapsed last year because a bridge piling was sunken and leaning.

“When the bridge was completed there were no roads on either side. Now roads are built to it but the bridge collapsed,” said Phan Van Vu, head of Trai Luoi A Hamlet in Dat Moi.

The Kenh Coc Bridge was 35 meters long with five spans and was put into use in 2011.

Also in Dat Moi, Cay Tho Bridge, which opened in 2012, has been in danger of collapse since the center pillar is sunken and leaning.

Bo Hu Bridge in Tam Giang Dong Commune in Nam Can District is in the same situation.

Cao Minh Quang, vice head of the infrastructure unit of Nam Can District, said the construction of each bridge under the rural transport program costs around VND300 million ($14,000) for a usage period of 15 years.

Six out of 14 bridges built in Dat Moi Commune under the program are at risk of collapse.

Besides collapses, another problem is the low height of the overbridges, meaning roads under them must be lowered so that trucks can go through.