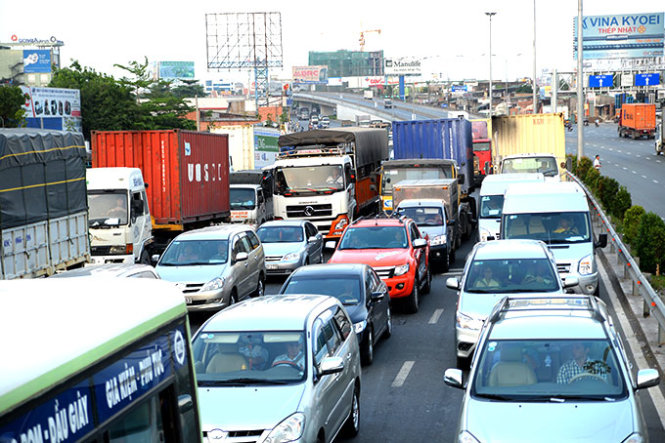 Too many toll stations in Ho Chi Minh City, its neighbors: transport firms

Many transport firms in Ho Chi Minh City and its neighbors have lamented that they get caught in so many toll stations put up too densely on the roads, causing the companies to incur more expenses than they should.

Many transport companies have told Tuoi Tre (Youth) newspaper that they are in a dilemma as customers will suffer if they increase transport charges, and their profit will shrink if they do not do so. These complaints have been heard more often since the toll station around the Dong Nai Bridge was put into operation on Wednesday. On Thursday, Tuoi Tre reporters accompanied a truck whose loading capacity ranges from 10 to 18 metric tons when it was carrying cargo from Tan Dong Hiep Industrial Park in Di An Town in Binh Duong Province to Nhon Trach District in Dong Nai Province. The driver, named Hai, first stopped at a toll station at the Binh Thung intersection in Di An, where he paid a fee of VND20,000 (US$0.92), and then halted again at the Binh Thang toll station, also in Di An, which charged him VND10,000 ($0.46). Hai later crossed the Dong Nai Bridge and paid another toll of VND60,000 ($2.77) before heading for National Highway 51. When the driver reached the toll station T1 in Bien Hoa City, he had to pay VND80,000 ($3.68). In total, Hai paid VND170,000 ($7.83) for his travel on a route that is less than 30km long but has four toll stations. When asked why each station charged different toll rates, Hai said, “I cannot understand. Previously I had to pay at three stations, but now I face four.”So many stations than expected All truck drivers who drive from Ho Chi Minh City to Dong Nai, Binh Duong or Binh Phuoc Provinces have expressed their depression facing more toll stations than they expected. Dung, a driver who often transports aluminum products from the city to Dong Nai’s Bien Hoa City, said, “Within a year, two toll stations were set up on National Highway 1 in Dong Nai.”

He referred to a station in Trang Bom District and another near the Dong Nai Bridge area.

“Drivers have to pass at least three stations when they transport cargo from Ho Chi Minh City to the Dau Giay intersection in Dong Nai. The whole route is only 60km so a transport firm will incur hefty costs that can make them cry when they have to pay tolls for a truck to go back and forth,” Dung said. As seen by the Tuoi Tre reporters, no route connecting such provinces as Dong Nai, Binh Duong, and Binh Phuoc has fewer than two toll stations. The road DT743 linking Binh Duong’s Thu Dau Mot City to the Hoa An Bridge in Dong Nai has three stations, for instance. Tran Thanh Bao, head of the operation department of Thien Phu Transport Service Co. Ltd., whose coaches operate from the Eastern Bus Station in Ho Chi Minh City, said there are as many as four toll stations on the route stretching 110km from the bus station to Ba Ria-Vung Tau Province. Tran Binh, the owner of a bus firm, said if a bus travels from the Rach Chiec Bridge on Hanoi Highway in Ho Chi Minh City through the Dong Nai Bridge to Trang Bom District in Dong Nai, a route that is only 40km long, it will have to pass three toll stations. Meanwhile, under a current regulation, the minimum distance between two toll stations on a route is 70km, Binh pointed out.Bad roads, high tolls Many drivers have also moaned that toll rates have increased sharply, while roads are now in bad conditions. In Binh Phuoc Province, the toll has risen twice from VND10,000 in 2014 to VND20,000, applicable since the beginning of 2015, for under-12-seat cars and under-two-ton trucks to travel on the Chon Thanh-Binh Long section on National Highway 13. The toll hike was approved by a resolution of the provincial People’s Council. The council has also ratified a solution to raise the toll on the ST 741 road linking Dong Xoai and Phuoc Long.Passengers suffer Many transport firms are complaining to the Ho Chi Minh City Cargo Transport Association that the fact that so many toll stations have been set up at the gateways to the city have pushed freight charges up.

Thien Phu Transport Service Co. Ltd. said it has reduced passenger transport fees three times, from VND100,000 ($4.62) to VND85,000 ($3.93) for the Ho Chi Minh City-Vung Tau route. But now, incurring a monthly toll of VND690,000 ($31.7) per 16-seat van, Thien Phu has said it will have to raise fares to offset higher tolls. Bui Van Quan, chairman of the Ho Chi Minh City Cargo Transport Association, said that many transport firms are dealing with their clients on their plans to hike freight charges, which will finally increase the prices of goods on the market. Meanwhile, many taxi firms in the city said that the more toll stations are set up, the higher costs passengers will have to pay, as their customers must pay for the toll on the route where a toll station is located.‘Toll stations must be re-arranged’ Lawyer Thai Van Chung, a member of the Ho Chi Minh City Bar Association and deputy chairman of the Ho Chi Minh City Cargo Transport Association, said that it is unreasonable to build the Rach Chiec toll station on Hanoi Highway and another station near the Dong Nai Bridge within a distance of more than 10km. The lawyer demanded that competent agencies re-arrange toll stations in Ho Chi Minh City and its neighbors so that tolls will no longer be a burden on transport businesses. According to Circular 159 of the Finance Ministry on the collection, submission, management, and use of road tolls, the minimum distance between two toll stations on a route is 70km, he added. Meanwhile, Nguyen Van Huyen, general director of the Directorate for Roads of Vietnam, said that such a distance is no longer suitable for many road projects with large investments, as it cannot ensure the return on investment for the investors. “In the coming time, the Directorate will propose that the Ministry of Transport ask the Ministry of Finance to remove the regulation on the minimum distance between two toll stations,” Huyen said. “Currently, a number of road projects in the BOT [Build-Operate-Transfer] form cannot survive if such a distance is applied, unless they are supported by the state budget,” he explained.