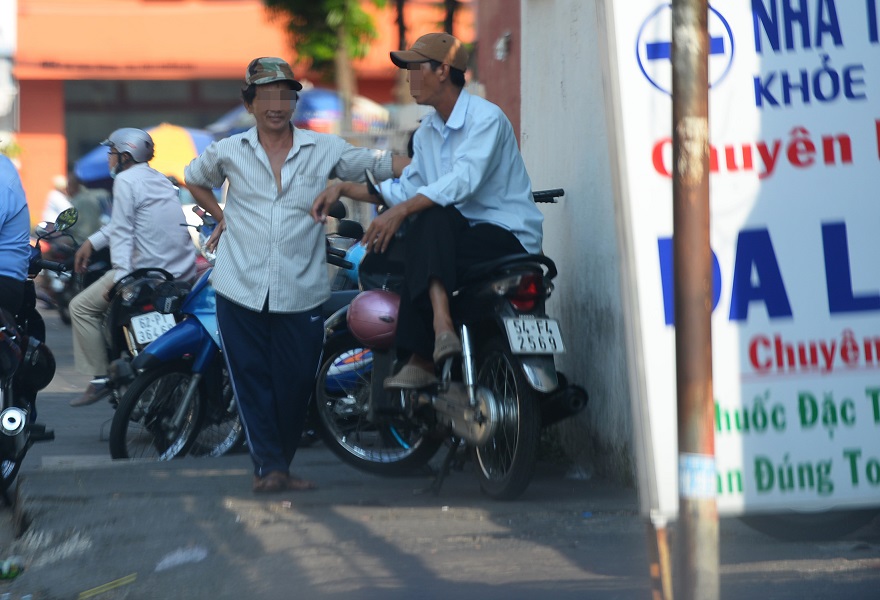 Illegal intermediaries at hospitals across Vietnam are a long-standing problem in the healthcare sector, with authorities having been unable to permanently address the situation.

Tuoi Tre (Youth) newspaper reporters went undercover as patients at the Ho Chi Minh City Hospital of Dermato Venereology and were approached by some brokers the moment they reached the infirmary.

“The hospital does not accept patients at this time of the day,” a man said before pointing toward a nearby private clinic.

Similar situations could also be observed at the entrance of the Hoa Hao clinic in District 10.

Having to pay only an extra VND150,000 ($6.72) to an intermediary, patients can have access to services there without having to wait in a queue.

After all necessary payments had been carried out, the correspondents disguising themselves as patients were brought to the examination room in just a few minutes, despite the fact that there were tens of people waiting outside.

“I know the activities of these mediators are illicit. However, I can save a lot of time getting diagnosis or treatment at the infirmary by paying some additional charges,” Huu Danh, a resident in Tan Binh District, said.

Not all people are blessed with such luck when dealing with these middlemen as several have reported being scammed.

Do Van Tinh, a Hanoi resident who has lived with a giant tumor on his face since he was just a young boy, decided to spend all the money he had getting treatment at the K Hospital in the capital.

Tinh and his brother, Do Van Tam, came to the infirmary last month when a man, about 30, offered help, saying that he could provide Tinh with access to treatment at private clinics run by top doctors from the hospital.

The brothers were introduced to a nearby clinic, where Tinh underwent an X-ray test, ultrasound, ENT endoscopy, and blood test before being diagnosed with neurofibromatosis.

The doctor there concluded that Tinh’s disease could not be treated at his facility and charged him VND1.9 million ($85.14) for the medical examination, roughly all the money Tinh had.

A middleman who gestures approaches a patient in front of the Ho Chi Minh City Hospital of Dermato Venereology in District 3. Photo: Tuoi Tre

Authorities could do nothing

Several employees at hospitals have been working with the intermediaries, introducing patients to services outside of the infirmaries to earn commissions for themselves.

A recent tip-off from a female patient at the K Hospital to Minister of Health Nguyen Thi Kim Tien showed that a doctor had scammed her with such a method, resulting in Minister Tien ordering a probe and penalizing the practitioner.

According to Bui Dieu, director of the hospital, the doctor has been transferred to another facility while warnings have been issued to the entire staff at the infirmary.

The mediators may cooperate with hospital staffers, Hai said, adding that they could also disguise themselves as patients to look for ‘prey’ inside infirmaries, introducing them to pharmacies and private clinics without proper certification.

These activities could affect the heath of patients, the director said, stating that there had not been any permanent solution to the situation.

According to a representative of the Ministry of Health, the agency will order all hospitals to sign an agreement with local police to clear all brokers inside and outside such facilities.