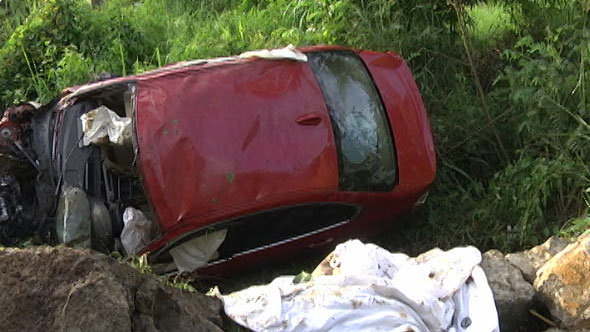 Two people were dead and five others were in a serious condition after their four-seater BMW ended up in a creek in the southern Vietnamese province of Dong Nai on Monday.

The horrific accident happened on National Highway 20 in La Nga Commune, Dinh Quan District, when a BMW carrying seven people, failed to make a sharp turn, slammed into a barrier and then jumped into a nearby creek, according to police’s initial reports.

Police said the driver had lost control of the car, leading to the accident.

The incident killed Tran Van Tuyen, 37, from Dinh Quan District, and Vu Van Hiep, 36, from Ho Chi Minh City, and injured the other five passengers, who were all hospitalized and in a critical condition, the reports said.

The road where the car smashed into a concrete fence before jumping into a nearby creek. Photo: Tuoi Tre

Local eyewitnesses said that the vehicle was traveling at high speed from Da Lat City to Dau Giay Town at the time of the accident, adding that it hit the barrier and collided with a concrete fence before plunging into the creek.

The area has a shortage of traffic lights and features many sharp turns, which has allegedly caused accidents to occur frequently, local residents added.