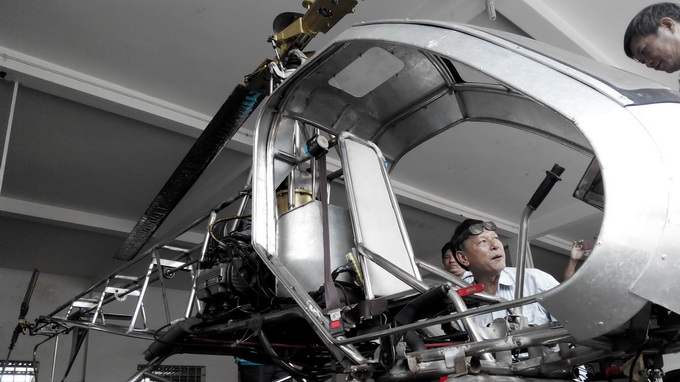 A local auto engineer in southern Vietnam has successfully put together a homemade helicopter capable of covering short distances at low altitude.

Nguyen Bui Hien, 62, is a mechanical engineer who lives and runs a small automobile garage in Binh Duong Province.

He recently made local headlines after footage of his prototype helicopter’s successful test flight surfaced online.

Hien is no novice however, having built his first helicopter back in 2012, the culmination of three years of intensive study of a helicopter’s schematics and operating systems.

According to Hien’s calculations, the VND200 million (US$9,110) helicopter would have operated safely at an altitude of 200 meters at 150 to 200 kilometers per hour, though he never conducted a successful test of its flight capabilities.

The passionate engineer confirmed to Tuoi Tre (Youth) newspaper on Tuesday that a new model he had been working on had recently been field-tested.

Hien said the successful test flight, which was recorded by his team, had been conducted on an empty field without public or media presence for safety reasons.

The helicopter, which he has named ‘Dream’, was able to hover two meters from the ground and covered a distance of about 100 meters, according to results of the test flight.

“I flew at a low altitude to minimize all potential risks,” Hien said, explaining why he had not pushed his prototype helicopter to its’ limit.

The engineer attributed the successful flight to his use of an alloy in the helicopters’ rotor blades, with its engine imported from the U.S.

Hien said that since 2014 he had spent hundreds of millions of Vietnamese dong on building his dream helicopter, and the engine alone had cost him US$5,000.

“I hope that in the near future the model will be further improved to enhance its performance,” Hien said, “Given positive results, these homemade helicopters can be used in agriculture as low-cost crop dusters.”

The engineer intends to patent his helicopter design and apply for a permit to test his vehicle at a larger scale.