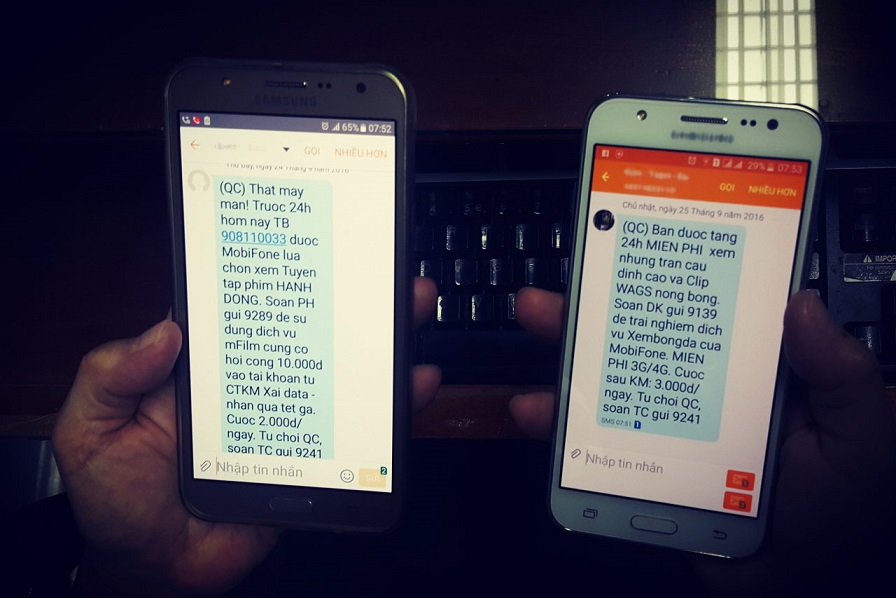 Mobile users in Vietnam have expressed their outrage at losing money on unwanted services they have not signed up for.

Owners of mobile phones are overwhelmed with advertising messages, encouraging them to register for a variety of paid services on a daily basis.

Local mobile network operators, or businesses that have signed deals with providers, can easily put money in their pockets by sending clients a few simple but deceitful messages.

Vo Thi Hoan, a resident of Binh Tan District, Ho Chi Minh City, was infuriated after discovering she had been charged VND2,000 (US$0.09) per day by a service run by MobiFone, one of the country’s leading mobile network operators.

“The network carrier only terminated the service following my complaint,” Hoan said.

Speaking to Tuoi Tre (Youth) newspaper, a MobiFone representative said that the client had registered for the mCare service, which provides daily information on food safety, via a wapsite.

“Upon completion of the sign-up process, a text message was sent to the user to inform them of their registration to the service,” he continued.

However, Hoan asserted that she had not requested the service in the first place.

In reality, a large number of users are unaware of the services they are using until they discover a considerable amount of money subtracted from their accounts.

Nguyen Thi Danh, 64, from Thu Duc District, Ho Chi Minh City, said she had been paying her operator, VinaPhone, a monthly fee of VND190,000 ($8.5) for an auction service she had never signed up for.

According to another phone user, clients can easily fall for the network carriers’ tricks after reading their attractive discounts related to the services.

They often pay less attention to the daily or monthly amount they have to pay to receive such a one-off deduction.

A paid service can be installed on mobile users’ accounts in many ways, including intentional or manipulated registration, or via malicious codes.

Clients can accidentally register for the services by simlpy clicking on the advertisements randomly appearing during their web browsing.

Users are advised to be more cautious before signing up to any service.

They should not be distracted by the promotions or potential prizes they could attain by using them.

Smartphone users should also pay extra attention while surfing the Internet or installing certain applications in order to prevent their devices from being infected with malicious codes.

In need of a tribunal

When clients complain about such incidents, network operators play both the ‘accused’ as well as the ‘tribunal.’

The victims in these cases are unable to receive the compensation they deserve as providers have all the evidence stating the date and time of their service registration.

Several members of the public have called on the State to establish a policy to better manage the advertising messages of local network carriers.

An arbitration board should also be formed to provide a fairer decision when dealing with users’ complaints.

According to economic expert Dinh The Hien, mobile network operators must be responsible when their clients are tricked by the messages sent by those businesses they sign contracts with.