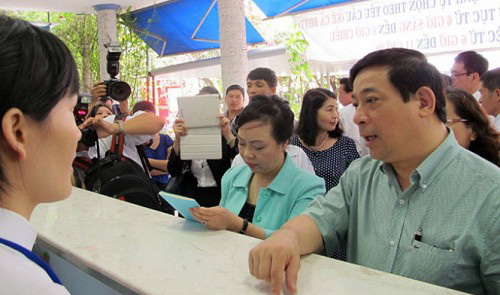 The health department of Vinh Long Province on Monday turned the first sod at a VND850 billion (US$38.11 million) general hospital.

The Xuyen A General Hospital in the Mekong Delta province will be the biggest of its kind in the locality once completed, the provincial health department said.

Overcrowding in hospitals in Vietnam is considered very problematic as many central infirmaries in such major cities as Hanoi and Ho Chi Minh City remain in a permanent state of overload.

In Hanoi, Saint Paul has 120 beds but serves about 400 inpatients a day; Bach Mai has 50 beds but receives 137 inpatients per day; and Thanh Nhan’s 50 beds must accommodate 163 patients on a daily basis, according to Luu Thi Lien, deputy director of the Hanoi Department of Health.

In Ho Chi Minh City, the oncology hospital is an example since it has a total of 600 beds but has to accept 1,500-1,700 inpatients, meaning that two or three patients share a bed. Some patients even lie under the bed.