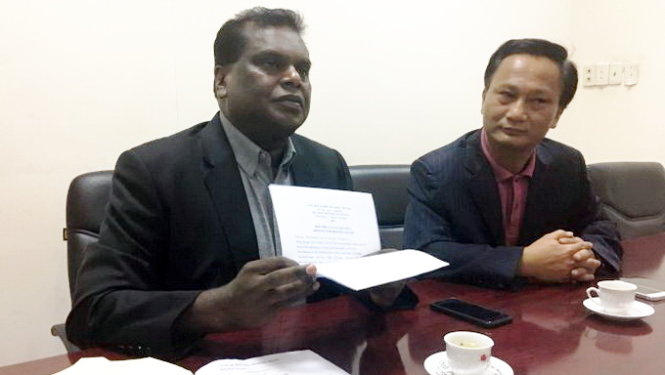 A Malaysian attorney has offered to voluntarily defend a Vietnamese woman charged with the murder of Kim Jong-nam, believed to be the estranged half-brother of North Korean leader Kim Jong-un, in Kuala Lumpur last month.

Lawyer Selvam Shanmugam was in Vietnam last week to collect information necessary in helping him defend Doan Thi Huong, one of two women believed to have smeared the nerve agent VX onto Kim Jong-nam’s face on February 13.

Before returning to Malaysia on Sunday, Shanmugam met with local media in Ho Chi Minh City and briefed them on his plan to help Huong.

The Malaysian lawyer said he had met with the family of Huong and received a letter from her father, pleading for his help to save their daughter.

Shanmugam said her father had asked him “to do [his] best to help his daughter,” adding that he believed that she was innocent.

The victim was using a passport in the name of Kim Chol at the time of the attack, with North Korea asserting that the deceased man was not Kim Jong-nam. However, Malaysian authorities have announced that Kim Chol is actually Kim Jong-nam.

Huong and an Indonesian woman were arrested days after the attack, and charged with murder on March 1.

While Malaysia concluded that it was Kim Jong-nam who had died of poisoning, Pyongyang claimed earlier this month that the man had probably died of a heart attack.

According to AP, Ri Tong-il, a former North Korean deputy ambassador to the United Nations, told reporters on March 2 that the man “probably died of a heart attack because he suffered from heart disease, diabetes and high blood pressure.”

Shanmugam told reporters in Ho Chi Minh City on Sunday that he was trying to verify the assertion from Ri Tong-il, who is among a high-ranking North Korean delegation now working on the case in Malaysia.

He added that the former ambassador had reason to attribute the North Korean man’s death to heart disease.

Shanmugam said he would use this as grounds to call for the Malaysian attorney general to review the charge against Huong.

The reason, he said, is simply that Huong would never return to the airport with the same T-shirt bearing the text ‘LOL’ if she had actually assassinated the man.

The lawyer added that poisoning may not be the actual cause of death for Kim Jong-nam, because if a nerve agent really was used, it was Huong who would be poisoned in the first place after being in direct contact with the highly toxic substance.

Shanmugam revealed that he would call on Malaysian authorities to invite North Korea to conduct a second autopsy on the victim, which he believed would result in some new, important clues in the case.

The lawyer said he was confident that if the victim is proven to have died of a disease rather than the supposed VX agent, Huong would only be charged with public order offenses rather than murder.

Shanmugam reassured Huong’s family that they should stay calm and optimistic as the lawyer believes that she will be found innocent and be released.

Shanmugam is poised to meet Doan Thi Huong in Malaysia on Monday.

The lawyer said he would show her the letter of her father, and help her to be able to say “I’m innocent” in English in the next court appearance, scheduled for April 13.

In her first court appearance on March 1, Huong and the Indonesian suspect listened to their charges in their mother languages.

Shanmugam said the next court proceedings will be complicated as it will not be easy to prove Huong had any intention to kill Kim Jong-nam.

If the court fails to find Huong guilty, she will be released.

Even if she is found guilty, the lawyer will contend that the North Korean man died of a heart attack, and not by the nerve agent VX.

The March 1 court hearing Huong stood for was in a Magistrates' court, the first level of Malaysia’s judicial system.

Shanmugam said Huong could also lodge an appeal in higher courts and ultimately to the highest level, the Federal Court, during a process which may take up to two years.