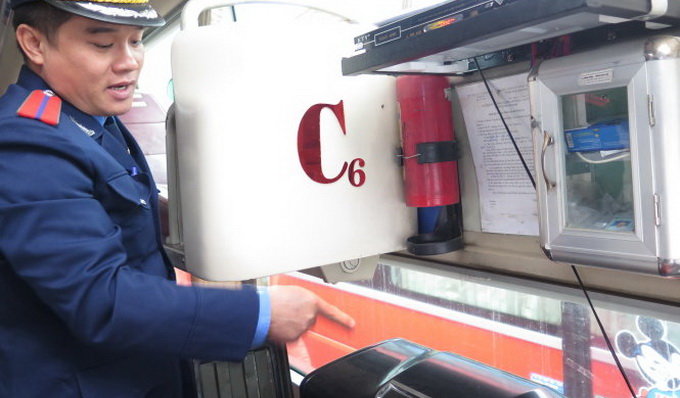 Multiple cases of sleeper buses catching fire have been recorded across Vietnam in recent months, with authorities scratching their heads to determine the cause and to prevent similar incidents.

Numerous cases have occurred since late 2016, reflecting an increased risk of fire on the mode of transportation.

In the most recent incident, the sleeper coach of Anh Tuan Bus Lines was traveling from Da Lat City to Gia Lai Province, both in the Central Highlands, on February 21 when it broke down.

The driver then discovered that the rear of the bus was on fire and managed to clear passengers and their belongings before the flames became out of control.

Minutes later the entire coach was engulfed in flames.

Earlier on February 8, a 42-seat passenger bus was devoured by a fire during its journey from the Central Highlands province of Kon Tum to the central city of Da Nang.

Similar cases also occurred in 2016, with one incident recorded in September and two others in December.

While all of those vehicles and property inside were destroyed by the inferno, no passengers were harmed.

In the two most recent cases in February, examinations by police officers showed that the fires were caused by electrical faults.

According to Tran Vu Quang, director of Ha Son Hai Transport Company, most vehicle fires arise from problems with the electrical system.

If the buses are regularly inspected, such accidents would be less likely to happen, Quang confirmed.

“Some transport businesses import their coaches from South Korea or Japan but equip them with Chinese-made electrical devices to save money,” he said.

“For example, a Japanese air conditioner installed on the bus costs about VND180 million [US$7,879] while its Chinese equivalent sells for VND60 million [$2,626],” he elaborated.

Adjustments to the vehicles

According to one officer of the Vietnam Registry, recent inspections have revealed that many bus operators have made several modifications to their passenger buses, including the installment of decorative lights, electronic banners, televisions, and DVD players.

Manufacturers of these vehicles have done careful calculations in their original designs, the officer said, warning that adding such devices could cause an overload to the electrical system, and result in fires.

Meanwhile, an official from the Vietnam Registry said that some bus operators have used outdated transformers to switch the buses’ original power of 24 volts to 220 volts in order to supply power to their TV screens.

The Ministry of Transport has ordered tighter supervision of passenger buses to prevent operators from altering the makers' original design.

Accordingly, officers from the Vietnam Registry will only grant approval documents to bus operators if their vehicles stay with their original designs, said Nguyen Hong He, an official from the agency.

Any additional equipment that can lead to potential fires need to be removed, he added.