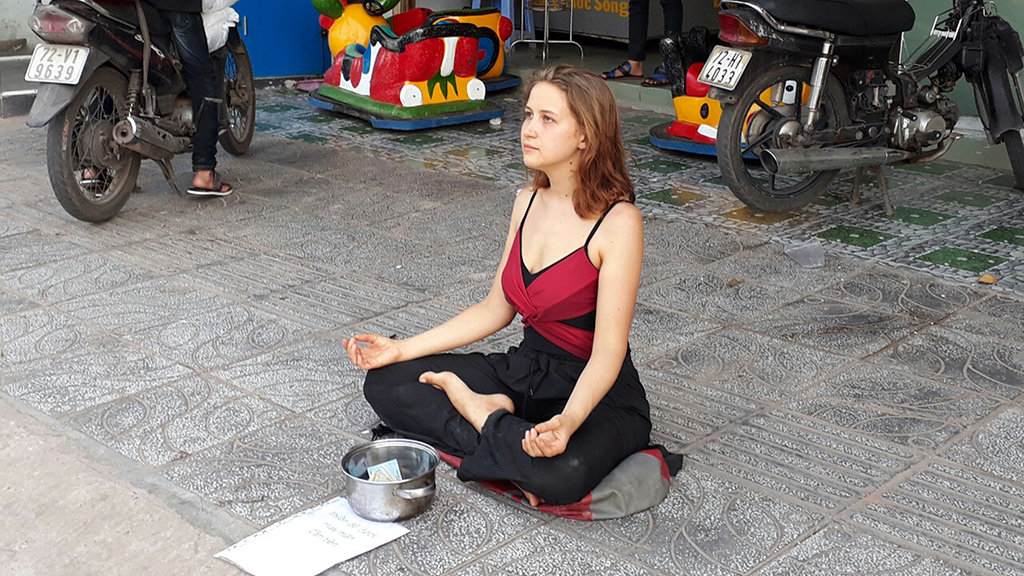 ​No exception for foreign ‘beg-packers’ on Vietnam streets: tourism director

The tourism director of the southern Vietnamese province of Kien Giang believes that Western beg-packers are intrinsically the same as local panhandlers.

Street begging is not allowed in Vietnam, and the rule applies to locals as well as foreigners, Tran Chi Dung, the Kien Giang tourism chief, told Tuoi Tre (Youth) newspaper on Tuesday.

“No exception was to be made for foreign street beggars in Vietnam no matter how polite they appeared to be,” he said.

Dung was referring to a recent photo posted on Facebook of a foreign woman meditating on a pavement on Kien Giang’s Phu Quoc Island, with a note written in Vietnamese placed in front of her that reads “meditate for luck, need money.”

According to Dung, foreigners have long come to Vietnam seeking short-term jobs and even resorting to begging on the street to fund their trip.

“The problem is, [foreign beg-packers] appear to be very polite in comparison with Vietnamese beggars,” Dung said.

“They play music, sing, perform magic tricks or, in the recent case, meditate, to ask for money so it does not annoy others.”

The department head added, however, that current regulations do not allow for street begging, and “Vietnamese beggars who are homeless and have no family would be taken in by social protection centers.”

However, Pham Van Nghiep, deputy chairman of Phu Quoc, said that the local administration had no authority to take the begging woman into a protection center as she was a foreigner and caused no disturbance in the area.

Nghiep added that Phu Quoc authorities have received reports of similar foreign beg-packers recently, who claimed to have run out of money during their leisure trip to Vietnam.

According to Van Cong Dau, director of Kien Giang Department of Foreign Affairs, police officers are tasked with maintaining order and security in their area of operation, which included protecting the safety of foreigners.

As these foreigners had resorted to begging on the street, it must mean they were in desperation and needed help from local authorities in making contact with diplomatic offices of their respective countries, Dau said.

“If foreigners come here looking for a short-term or long-term job – and I have to make it clear that street-begging is not considered a job in Vietnam – then they must have a legitimate labor contract in accordance with Vietnamese laws,” Dau said.

Police of Phu Quoc’s Duong Dong Town, which had been working with the female foreigner for identification, have not responded to Tuoi Tre’s request for comment.