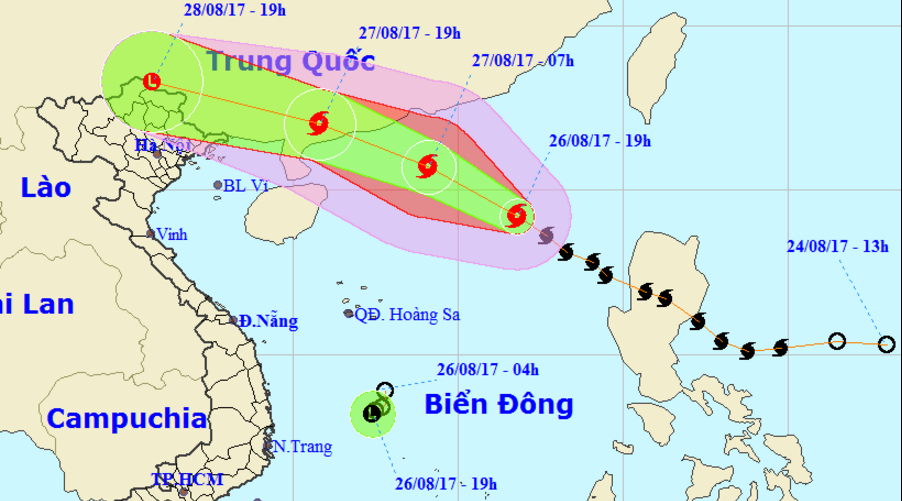 The East Vietnam Sea has been under the influence of a typhoon and tropical depression, resulting in bad weather patterns across the country.

While the northern part of the maritime area is being impacted by Storm Pakhar, a tropical depression formed in the southern section on Saturday morning.

The low-pressure system was located some 190 kilometers off the south-central provinces of Binh Dinh and Khanh Hoa.

By the late evening of the same day, the tropical depression weakened into a low-pressure zone and is expected to dissipate on Sunday, according to the National Center for Hydrometeorological Forecasting.

Under the effect of the tropical depression’s circulation, rains and strong winds will hit the coast from the south-central province of Ninh Thuan to Ca Mau Province in the Mekong Delta.

Typhoon Pakhar was moving 740 kilometers southeast of China’s Leizhou Peninsula as of 7:00 pm on Saturday, packing winds at 75 to 90km per hour and squalls at up to 117km an hour.

The tropical storm is forecast to make landfall in the Chinese provinces of Guangdong and Guangxi before weakening and dissipating near the Vietnam- China border on Monday.

According to Vu Anh Tuan, an official from the National Center for Hydrometeorological Forecasting, the typhoon can bring about downpours in localities in northern Vietnam, accompanied by floods and landslides.

Rough seas will also be caused in the northern part of the East Vietnam Sea, Tuan added.