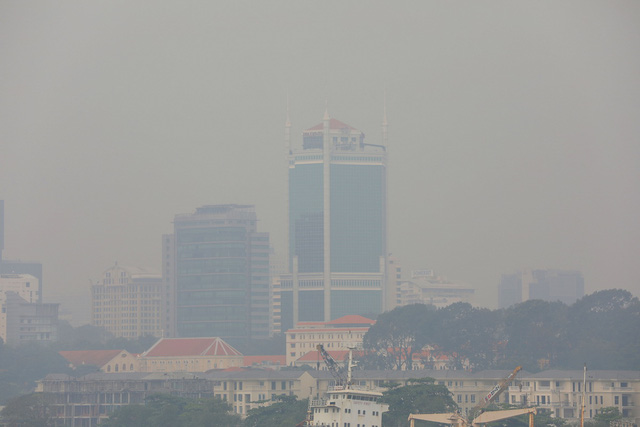 Unusual smog overshadowed many areas of Ho Chi Minh City from the early morning to well past noon on Thursday, amid a series of rains and thunderstorms that severely affected traffic earlier this week.

The phenomenon, ending at around 1:00 pm and followed by a heavy rain, made it look as if the night had already fallen on the city’s downtown area and several districts.

Le Dinh Quyet, deputy head of the forecasting department of the Southern Regional Hydro-meteorological Center, confirmed to Tuoi Tre (Youth) newspaper that it was smog that enveloped the southern metropolis this morning.

“Smoke and other pollutants from plants, factories and manufacturing facilities in Ho Chi Minh City, plus emissions from the huge number of vehicles, have sent a signification amount of dust into the atmosphere,” he said.

“As temperatures [in Ho Chi Minh City] dropped [to 24-25 degrees Celsius], the steam in the atmosphere combined with dust and resulted in smog, blocking visibility.”

Quyet added that smog has reduced visibility, adversely affecting traffic activities of all kinds, from road and river to air transportation.

It has rained heavily in Ho Chi Minh City several times at midnight or midday this week, leaving the public wondering if it is an unusual phenomenon.

However, in a separate interview with Tuoi Tre, Quyet said these downpours were normal as the rainy season is in its peak in southern Vietnam.

In the southern region, the rainy season usually begins in May or June, and ends in October or November.

“September and October are considered peak times of the rainy season in the southern region,” he said.

Quyet added the average rainfall in Ho Chi Minh City in these two months is 300mm a month, while the figure this year is only 200mm.

“This means what were said to be unusual rains these days are actually normal phenomena,” he concluded.

Below are some photos of the smog in Ho Chi Minh City this morning.