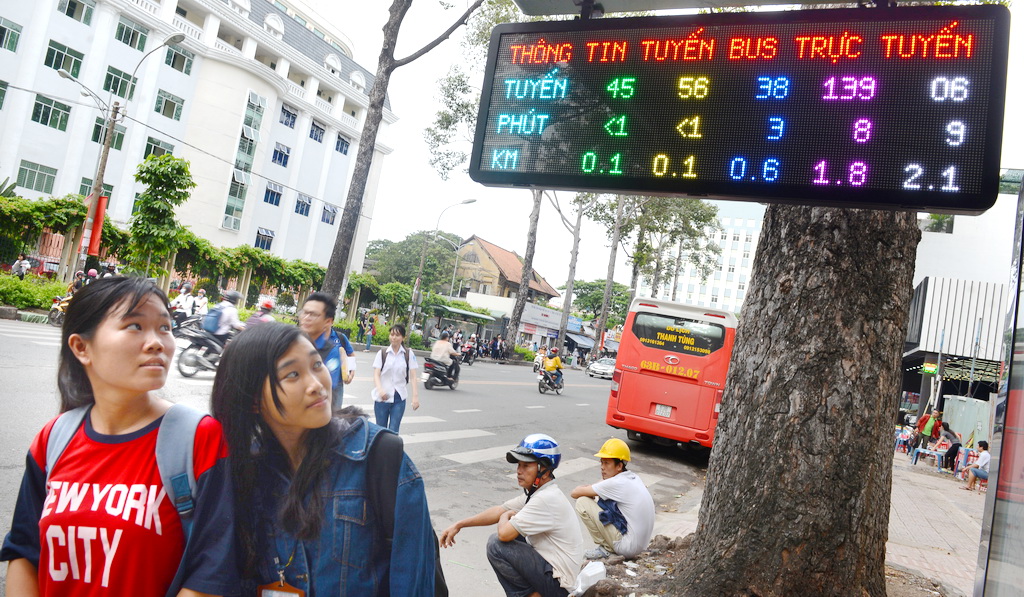 A project to turn Ho Chi Minh City into a ‘smart city’ has been submitted to the municipal People’s Council for feedback, with the hope that it will bring multiple benefits to local residents.

The plan is scheduled for the 2017-20 period with a vision for 2025, and is expected to provide a variety of conveniences for citizens, including low energy costs, favorable traffic systems, and easier interaction with local authorities, among others.

The ‘smart city’ model has been piloted at Quang Trung Software City (QTSC) in District 12 over the past two years, where workers have been assisted in their daily tasks by various technology applications.

Hoa, who lives in Go Vap District and works at QTSC, starts her working day at 8:00 am.

Upon arriving at the entrance to her workplace, a camera system records the license plate number of Hoa’s motorbike.

The woman then walks into her office, where all the lights and air conditioners are automatically switched on.

Hoa’s computer then updates her on meeting and business trip schedules, along with important files and documents via an application installed on the device.

According to Lam Nguyen Hai Phong, director of Quang Trung Software City Development Company, about 150 IT businesses with over 20,000 employees work inside the 43-hectare venue.

All electricity, telecommunication, lighting, drainage, and green trees within the premises are digitized and connected to achieve more efficient management.

An app has been designed to facilitate the effort, providing businesses with easy access to all the necessary information.

However, there are still challenges in linking separate data, Long said.

“We have spent two years compiling the database as well as training our staff.”

Similar to the model at QTSC, all digitized information in the southern metropolis will be connected and stored in a massive database, Long elaborated.

The process requires multiple steps, he said, adding that the model should prioritize administrative reform and improvement of the local investment environment.

Upon completion, the ‘smart city’ model will deliver a series of benefits, including low energy costs, favorable traffic systems, higher-quality education, transparent business environments, easier interaction between citizens and authorities, and an improvement in competition and living conditions, Long elaborated.

Regarding the management of local land plots, the company director stated that a specialized database could be completed in two years.

This would allow residents the ability to search for all information including the legal status of a piece of land they intend to buy without having to go to local land offices.

According to Tran Trong Tuan, director of the Ho Chi Minh City Department of Construction, the ‘smart city’ plan is a long-term project.

The agency has been offering online services, which is the first step in entering the era of the ‘smart city,’ the official remarked.