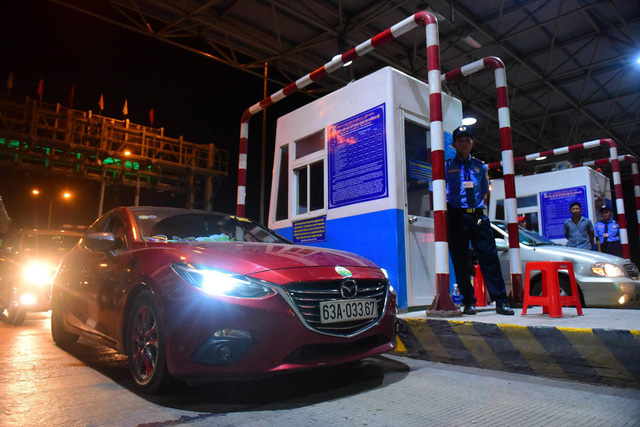 Southern Vietnam tollgate shuts down over repeated opposition from drivers

A toll station belonging to a BOT (build-operate-transfer) project in southern Vietnam was forced to shut down again due to fierce opposition from commuters on Thursday, after a three month closure for the same reason.

The Cai Lay toll station on the section of National Highway 1 running through Cai Lay Town in the Mekong Delta province of Tien Giang resumed operations on Thursday morning following a three and a half month shutdown.

A BOT project upgrading the section of highway and building a detour across Cai Lay Town at a cost of VND1.389 trillion ($61.1 million) is currently operating the facility.

BOT is a project-financing framework in which the developer receives a concession from the private or public sector to finance, design, construct, and operate a facility for a certain period, during which it can raise finances and retain all revenues generated by the project.

At round 12:45 pm, three hours after re-opening, the tollgate was forced to close after too many drivers paid the fee in small denomination banknotes as a show of protest.

The station resumed operations at around 3:35 pm before being forced to cease the toll collection at 4:50 pm for the same reason.

At around 1:30 am on Friday, a group of commuters changed their protest tactics; this time requiring attendants to give them back VND100 in change.

As the smallest denomination note, the VND100 bill is effectively never used by members of the public, despite its validity.

Consequently, the employees did not have enough VND100 banknotes and were once again forced to close the facility for a third time since reopening it on Thursday.

The repeated incidents caused traffic backups from Ho Chi Minh City all the way down to the Mekong Delta city of Can Tho.

The Cai Lay toll station was first put into operation on August 1 despite fierce opposition from drivers over the tollgate being placed on the existing highway instead of the new detour.

The location of the tollgate means that a fee is collected regardless of the route chosen by drivers, rather than only being collected from drivers wanting to use the new detour.

Commuters believed that paying their regular road maintenance fees would give them the right to travel on the upgraded national highway without paying tolls.

Following continuous objection, the toll station was temporality shut down on August 15.

The Ministry of Transport later announced that the facility would not be relocated.  Instead, the toll rate would be decreased.

On the Thursday reopening, security guards and traffic police officers were mobilized near the tollgate to prepare for potential disorder.

However, the preventive measures proved ineffective against commuters’ refusal to follow the directions.

Trung and Phuong were released on the same night and are expected to be summoned again on Saturday.