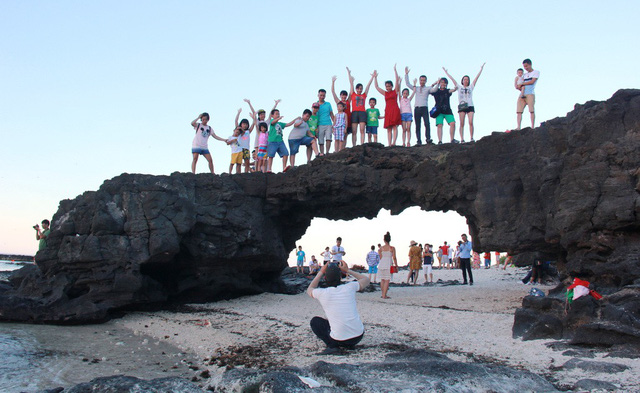 The administration of Quang Ngai Province in central Vietnam has faced opposition after it agreed in principle to the surveying of a large area within a local marine reserve for the construction of a resort.

The surveys are to be carried out by Vietnam Infrastructure Investment & Development Joint Stock Company (VIID) on Quang Ngai’s Ly Son Island to complete dossiers for the company’s proposal to invest into a local resort project.

The planned resort would encompass an area of around 70 hectares within the Ly Son Marine Reserve and the Binh Chau Global Geopark, the latter of which is being filed for recognition by the United Nations Educational, Scientific and Cultural Organization (UNESCO).

According to Nguyen Anh Tuan, deputy director of VIID’s Quang Ngai office, 80 percent of the project would float on the water’s surface, with only one block of villas built on land next to an existing residential area.

There are currently two construction options, he said, the first being to build the floating structures using light-weight composite materials and securing them in place with anchors.

The second option is to use concrete columns as a foundation for the floating villas, each requiring between six and eight such columns buried deep in the ocean bed.

“In both options, the main structure floats on the surface, doing no harm to the geological platform of the area and requiring no land reclamation,” Tuan said.

“I have nothing to say to those who insist that putting a few concrete columns into the ocean would threaten conservation efforts. What’s the point of conservation without development? Should we all just live on rafts like our ancestors?” he said.

However, not everyone has bought Tuan’s line of reasoning, with experts weighing in to criticize the resort project’s threat to protected waters.

According to Dr. Vu The Long, an expert from the Vietnam Institute of Archeology, a development of over 70 hectares would pose an environmental risk to a small island like Ly Son.

Spanning less than 1,000 hectares off the coast of Quang Ngai, Ly Son is known for hosting one of the most well-protected natural ecosystems among Vietnam’s islands, and has only recently developed its own tourism industry.

The construction of the resort would be too much of a risk to the underwater coral reefs and volcanic geological layers, Long explained.

Meanwhile, Assoc. Prof. Dr. Vu Cao Minh from Vietnam’s Bureau of Geology claimed that UNESCO would soon recognize the coastal area in Ly Son’s Binh Chau Commune as a global geopark, after which every project in the area would require approval from the Vietnamese prime minister.

“My advice is to maintain Ly Son until then and refrain from any invasive activity on the island,” Minh said.

“Tourists come to Ly Son for its natural heritage, not because there are five-star amenities on the island or because it is a shopping paradise,” said Dr. Tran Van Tan, president of the Vietnam Institute of Geosciences and Mineral Resources.

“What needs to be done is to conserve the natural environment and ecosystem. That’s what sustainable development really is,” he stressed.