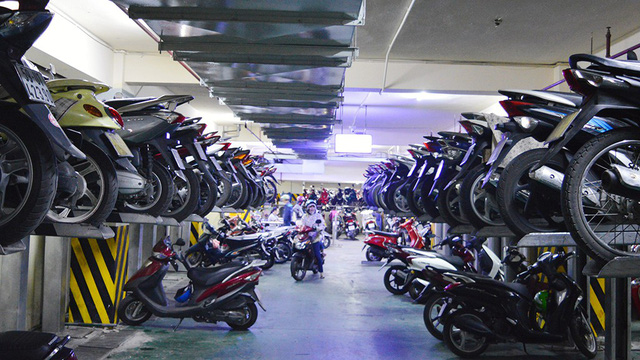 Ho Chi Minh City authorities will begin shutting down CBD sidewalk parking lots before extending the effort into other neighborhoods.

The municipal People’s Committee has issued a document calling on administrations of the city’s 24 districts to prohibit informal parking lots from operating on local sidewalks within the first quarter of this year.

However, sidewalk parking lots will still be allowed in areas where they are deemed necessary.

If any business is willing to operate a free sidewalk parking lot, local administrations will review its need and functionality before issuing a permit.

During an interview with Tuoi Tre (Youth) newspaper, Le Minh Khoa, head of the Ho Chi Minh City Youth Volunteer Force, said that his agency had coordinated with authorities in District 1 to review the operations of local sidewalk parking lots.

Chairman of the District 1 administration Tran The Thuan will give a decision on locations where these parking venues should be kept before handing over their management to the youth volunteer force.

The change is required to meet the demand for parking space by local residents, and preserve enough space for pedestrians, Khoa said.

“We will establish a mechanism to cooperate with the district authorities by the end of this month,” he continued.

The mechanism will focus on reducing the number of parking lots on promenades, managing lots that will be allowed to remain operational, as well as ensuring social order and security, Khoa elaborated.

The campaign will be expanded to other districts if it proves effective in District 1.

Similar lots will be established at Tu Du Hospital in District 1 and the Quang Trung Software City in District 12, Khoa stated.

“We are trying to minimize the number of sidewalk parking lots and invest in indoor parking facilities,” he continued.

Parking space along promenades will mainly serve local residents for brief periods during special occasions and public holidays only, he added.

Indoor parking lots operated by the youth volunteer force will be properly supported, with vehicles charged in accordance with regulations and employees offered salaries and incentives, according to Khoa.

However, competition for these locations is strong, with wealthy private firms able to make ‘bids’ to the local authorities to operate the indoor parking lots.

“Some parking lots that had been operated by the youth volunteer force for decades have recently been transferred to local businesses who made higher bids,” Khoa explained.