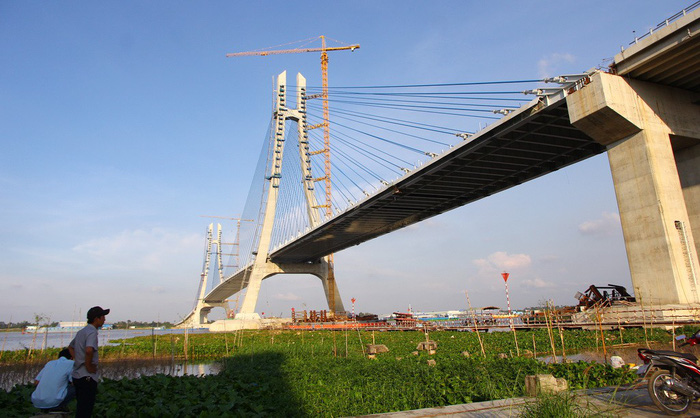 The construction of a major bridge in Vietnam’s Mekong Delta has stalled for multiple months after cracks were found on one of the girders, and the cause has yet to be announced.

The Vam Cong Bridge project, which connects Dong Thap Province and Can Tho City across the Hau (Back) River, was halted in mid-November 2017 after some cracks were discovered on a steel girder at the top of abutment No. P29.

A team of officers from the Transport Engineering Construction and Quality Management Bureau, the Department of Science and Technology, and local pundits were tasked with resolving the problem.

Experts from South Korea were also asked to give a helping hand to deal with the issue.

However, no official announcement regarding the cause of the cracks had been made as of Monday, and the construction site was still rather quiet then.

Some construction workers told Tuoi Tre (Youth) newspaper that shortly after the discovery of the cracks on abutment No. P29, other breaks were also found on the girder at abutment No. P28, but the situation was less severe.

Experts stated that the fractures indicate a more serious problem and could have been caused by high pressure.

During an interview on Monday, Tran Van Thi, general director of the Cuu Long Corporation for Investment, Development and Project Management of Infrastructure (Cuu Long CIPM), which is the project developer, stated that experts from Vietnam and South Korea have been mobilized to figure out the reason and come up with a solution.

“We have also consulted pundits from another country regarding the situation,” Thi said.

Everything is being reviewed by the transport ministry, and an official solution will soon be reached, he continued.

Thi added that the developer will try their best to complete the construction this year.

Initiated in September 2013, the Vam Cong Bridge project is carried out at a cost of US$271 million, funded by official development assistance (ODA) from the South Korean government and corresponding capital from Vietnam.

Upon completion, the structure will be 2.97 kilometers long and 24.5 meters wide, including six lanes for vehicles.

Along with the Cao Lanh Bridge, which was opened to traffic on May 27, Vam Cong is a much-awaited bridge as it will shorten the journey between provinces in the Mekong Delta.