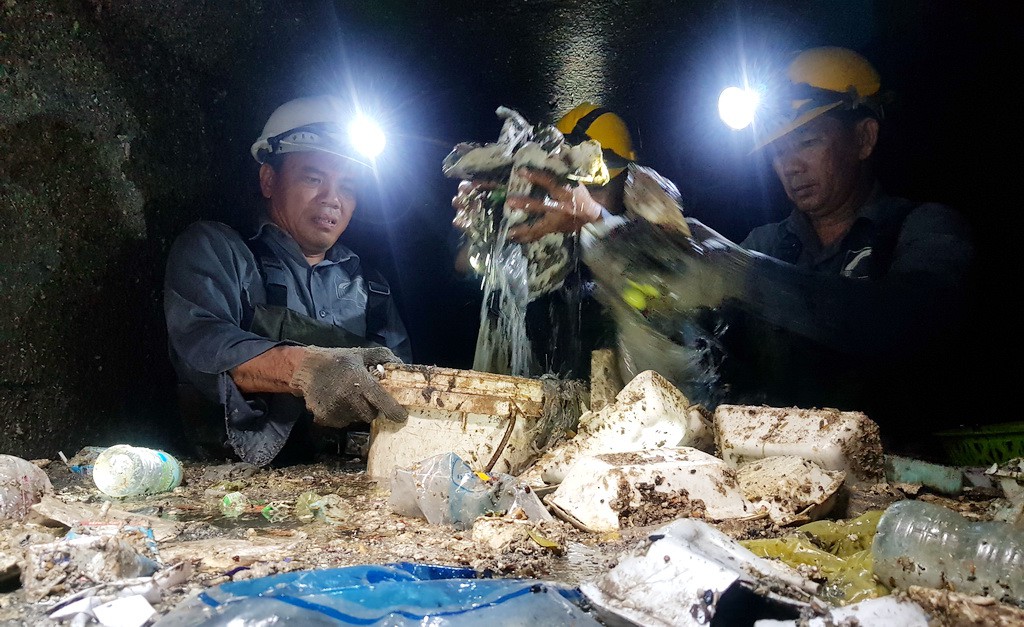 Not all garbage in Ho Chi Minh City is consigned to designated dumps, as some of it ends up in sewer pipes underneath city dwellers’ feet and comes in various types, with everything typically found on the street.

Drainage workers regularly enter sewage pipes in the southern metropolis and bring to the ground a large amount of trash that ranges from bottles, nylon bags to syringe needles and condoms.

The metropolis hires 350 drainage workers, who divide themselves into teams.

All kinds of trash

The workers say every day they retrieve over 6.5 metric tons of garbage from sewage pipes.

On a recent day, several drainage workers opened a manhole along downtown Nguyen Thai Hoc Street and they were greeted with a hot waft of suffocating stench.

Some of them waited around 15 minutes for the mixture of gases, amongst them noxious ones, to dissipate before venturing into a sewage pipe there.

“When I did this job for the first time in my life, I didn’t dare climb down but risked doing it anyway and after a few minutes, I was constantly vomiting and felt stupefied,” said Nguyen Cong Thuong, a 54-year-old drainage worker.

“I grew gradually accustomed to it. I’ve spent even 22 years working in sewage pipes. That’s not a short time.

“It’s a normal occurrence that feces are flushed down home toilets and fly into the faces of people collecting waste here.”

After getting inside the pipe, the workers waded amidst floating trash in chest-high wastewater, their legs seeming fettered by a layer of sludge up to the knees.

As light from headlamps played in the direction they were facing, buoyant garbage kept emerging all along the pipe, a swarm of cockroaches hissed and rats scuttled on the wall.

Wastewater dripped on their heads and even cascaded down on them while they were moving under street-side eateries.

The workers said they sometimes collected syringes and needles that needed several large buckets to be carried to the ground along Nguyen Tat Thanh Street in District 4.

‘If everyone is afraid of getting dirty, who’ll clean the city?’

The team said what they collect underground in Ho Chi Minh City depends chiefly on the location it is found.

But what they feared most are found in pipes running underneath Cho Lon Market in District 5 and Binh Tan District’s Mien Tay (Western) Bus Station – a terminal for long-haul buses to Vietnam’s Mekong Delta.

“The chemicals burned my skin and caused constant itchiness all over and the oil was terribly black and thick,” said Hoang Ngoc Toan, another drainage worker.

Toan said many city residents publicly put trash right at sewer grates and discard it through manhole lids, while even some street sweepers push it into sewage pipes on the sly.

“But as I chose this job, I’m resigned to dirtiness. Wastewater usually makes its way to my mouth when I work in a pipe with too much water. If everyone is afraid of getting dirty, who’ll clean the city?”