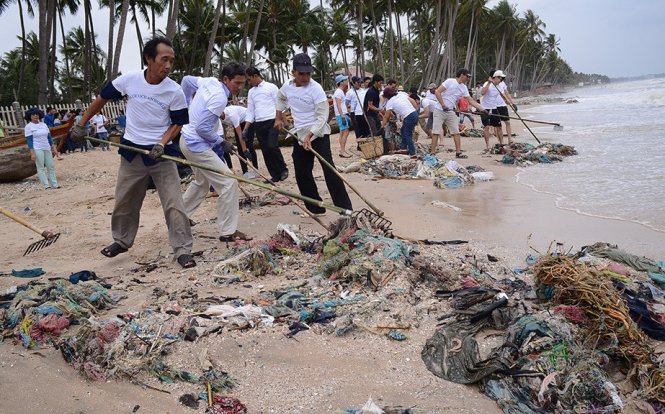 Marine contamination due to plastic waste has become increasingly serious across Vietnam, prompting local authorities to come up with assertive solutions before it is too late.

The world discharges 4.8 to 12.7 metric tons of plastic waste into the ocean every year, of which six percent, or 0.28 to 0.73 metric tons, come from Vietnam.

Vietnam ranks fourth in the world regarding the amount of plastic waste released into the sea, according to recent findings.

The northern city of Hai Phong is among the localities with many polluted beaches.

According to the observation of Tuoi Tre (Youth) newspaper reporters, beaches in Do Son and Tien Lang Districts, and Cat Ba Islands are filled with empty bottles and bags, as well as other types of plastic waste.

Local authorities have to mobilize people daily to clean up the rubbish.

About eight to 10 cubic meters of plastic waste are collected from Cat Ba Islands every day.

In the north-central province of Thanh Hoa, Hau Loc District has long been infamous for its contaminated coast.

More than 80 percent of locals are fishermen, who have the habit of dumping their garbage into the sea, said a local official.

Local scientists warned that ‘white pollution’ can contaminate aquatic lives, affect the fishery sector, and cause degradation of the marine ecosystem.

In order to curb the problem, Deputy Minister Nhan believed that authorities encourage the use of biodegradable plastic and raise taxes on harmful plastic bags.

In Duy Hai Commune, a fishing town in the central province of Quang Nam, the local administration has been showing residents how to collect and treat their waste properly instead of littering along the coast.

According to Tran Van Linh, president of a fishery association in the central city of Da Nang, fishers only discharge a small amount of plastic waste into the sea.

Authorities in the southern province of Ba Ria-Vung Tau have also joined the efforts by encouraging local fishermen to equip their boats with recycle bins.

On Con Dao Islands off the province, authorities have been spending money from the local budget dredging plastic waste along the coastline.