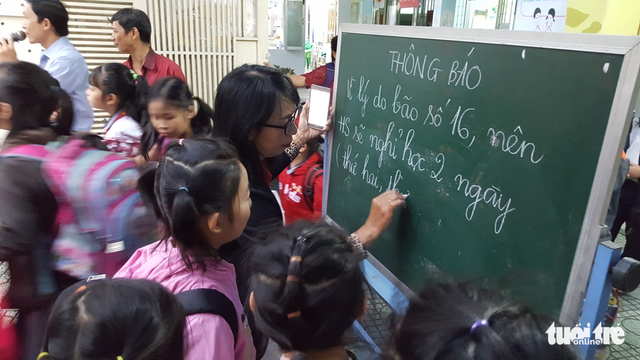 The education department of Ho Chi Minh City has asked local schools to actively give students days off in the event that a tropical depression hitting the city this week gets worse.

Storm Toraji, which formed on the East Vietnam Sea, devolved into a tropical depression on Sunday as it was heading for southern Vietnam.

The tropical depression is forecast to make landfall in Ho Chi Minh City on Monday, packing winds of up to 60 kilometers per hour.

If weather conditions are not safe for commute, schools should report to the department and local administration and allow students to take days off until the weather clears up, the municipal education department said in an urgent dispatch on Sunday.

Schools are asked not to organize outdoors activities and field trips during the duration of the tropical depression for safety reasons, the department said.

Officials are told to closely monitor the path of the tropical depression to swiftly respond to any complicated developments.

In December 2017, over two million students in Ho Chi Minh City was given days off to brace for Typhoon Tembin, which eventually cleared up without causing any casualties in the southern metropolis.

Meanwhile, a new tropical storm that has just formed off the Philippines is forecast to follow a similar path to Toraji, becoming the ninth storm to hit Vietnam later this week.