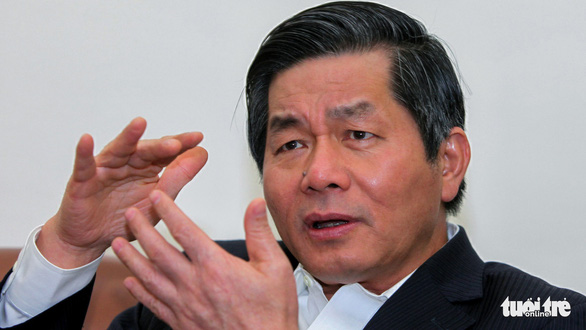 Vietnam’s former Minister of Planning and Investment Bui Quang Vinh has been disciplined for being involved in a scandalous US$391-million deal where state telecom company Mobifone attempted to acquire most of a private firm.

Vinh, who is also an ex-member of the Party Central Committee, has been slapped with a reprimand from the Party’s Secretariat for his violation.

The decision was made during a meeting of the Secretariat on Tuesday, which was chaired by General Secretary and State President Nguyen Phu Trong.

Vinh was disciplined for his role in the now-aborted deal where Mobifone tried to buy a 95 percent stake in AVG, a pay-per-view private TV company.

While serving as leader of the Ministry of Planning an Investment, Vinh showed a lack of responsibility when signing a document on November 24, 2015, in which he asked the prime minister to approve such investment of the state-run telecom firm.

After hearing some unusual information regarding the project, Vinh submitted another document suggesting the cessation of the project.

However, it was too late as the Minister of Information and Communications (MIC) had already approved it.

According to the Party’s office, Vinh has acknowledged his wrongdoings and accepted the disciplinary measure.

Mobifone, an entity owned entirely by the state, has been under the management of the MIC since December 2014.

The Central Inspection Committee and government inspectorate then began a comprehensive examination of the transaction in July 2017, before the contract was nullified in March 2018.

Inspectors stated that the deal could have caused losses worth over VND7 trillion ($308 million) to the state budget.

In July, police arrested a former chairman of MobiFone and a senior official of the MIC accused of involvement in the case.

Vietnam’s information minister was suspended that month and replaced in October over alleged ties to wrongdoing at the company.