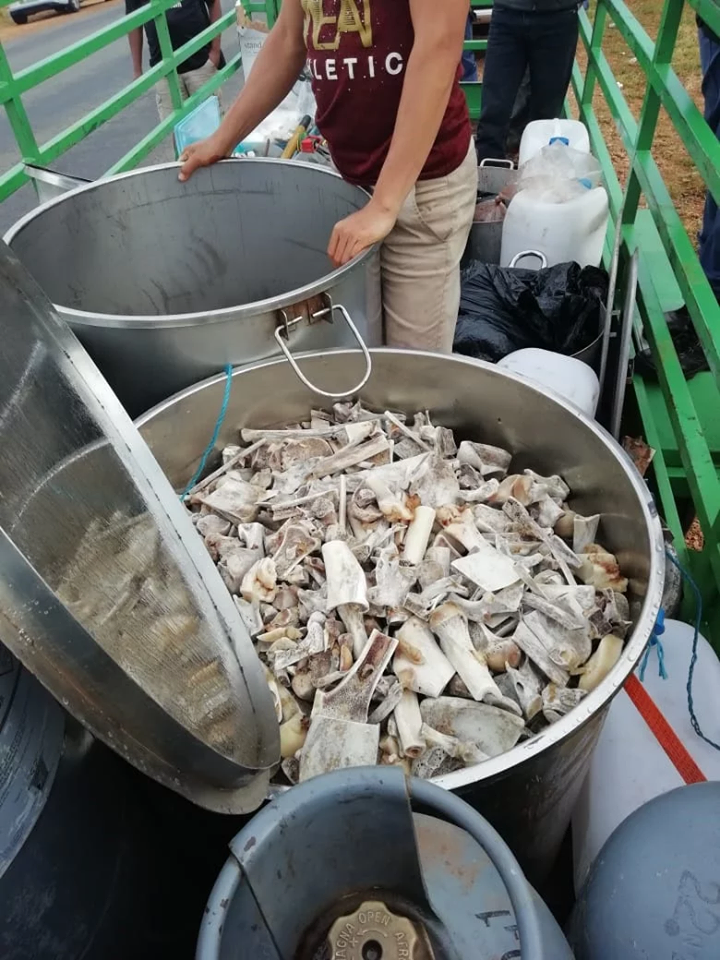 Six Vietnamese nationals appeared at a court in South Africa on Tuesday following their arrest days earlier for possession of lion bones with the intention of making highly sought-after bone paste from the wild animal parts.

The suspects, aged between 33 and 60, face several charges, including illegal possession of game products, particularly lion parts and a tiger carcass, without a permit and carrying out restricted activities involving the specimen of a listed, threatened, or protected species.

South African media reported that a police operation pounced on an illegal Vietnamese lion and tiger bone syndicate operating in North West Province, South Africa, around 250 kilometers from the administrative capital of Pretoria, on Sunday, after at least 40 lions were reportedly killed at a local lion farm.

The suspects, including six Vietnamese and two South African nationals, were intercepted while driving in a convoy between farms in North West.

After searching the group’s vehicles, officers recovered lion bones, lion meat, a tiger skin, gas cylinders, gas burners, containers, a saw, knives and other equipment believed to have been used to process the lion bones.

The suspects then led officers to a farm approximately 30 kilometers from the city of Klerksdorp where the lions were allegedly slaughtered, News24 reported.

At the farm, a lion skin was found being dumped in the bush and large machines – believed to have been used to cut the bones – were also found in the garage.

It is alleged at least 30 lions were killed at the farm on Saturday, while a dozen more had been killed on Friday, according to South African police.

The suspects are believed to be involved in an extensive syndicate that makes and trades lion and tiger bone paste, local police said.

Bone paste, typically made from tiger or lion bones, is believed to possess a range of rare medicinal properties in East Asian medicine, leading to the poaching of the wild animals despite laws criminalizing the activity in Vietnam and other countries.

The eight suspects made their first appearance at a magistrates’ court in Klerksdorp on Tuesday, with one lawyer assigned to represent all the defendants, according to the Vietnam News Agency.

Police are looking for more suspects, and further charges could be added as the Klerksdorp court date has been postponed to December 5 for further investigation and bail applications.

The suspects will remain in custody, according to News24.

The Embassy of Vietnam in South Africa said they are taking the necessary steps in their power to exercise protections for the six Vietnamese citizens arrested in the country.

It says it consistently advises Vietnamese tourists in the country to obey local laws, including those protecting wild animals, and refrain from activities that may harm bilateral relations.

In recent years, the countries’ police forces and justice systems have agreed to cooperate in multiple fields, including the extradition of criminals, in efforts to prevent transnational organized wildlife crimes.