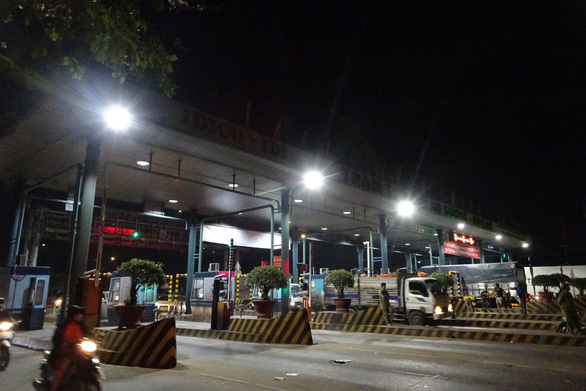 A tollgate on the National Highway 1 section passing Binh Tan District in Ho Chi Minh City was on Monday evening forced to stop collecting tolls after drivers refused to go past the station, causing heavy congestion.

Drivers argued that the station should have been shut down in May 2016, as it is licensed to collect tolls for only 145 months from its opening in April 2004.

The An Suong – An Lac Toll Station is operated by Vietnam Urban and Industrial Zone Development Investment Corporation (IDICO), a state-run corporation under the Ministry of Construction.

Under the build-operate-transfer (BOT) financing model, IDICO is authorized to collect tolls on the National Highway 1 section as payment for its development of the road.

On Monday evening, drivers staged a mass stoppage in front of the toll station, carrying a “contract” between IDICO and the transport ministry showing the toll collection duration as 145 months from April 2004.

The station has carried on collecting tolls 31 months after the contract’s expiration, drivers claimed.

“This is a busy road. Imagine the amount of money they must have bagged in those 31 months. We won’t agree to that.”

As the incident caused severe congestion on the lifeline road, IDICO was forced to close down its tollgates and allow vehicles to pass the station without paying any fee on Monday evening.

Nguyen Hong Ninh, director of IDICO, said the drivers had mistaken the real toll collection term the developer is entitled to.

While the corporation’s initial contract with the transport ministry was mature in April 2016, IDICO was involved in additional projects to develop multiple overpasses on the National Highway 1 before this expiration date, which led to extension of the toll collection duration.

IDICO is now authorized to operate the toll station until January 2033, Ninh said.

The contract renewal process has undergone proper procedures as required by law and approved by authorities, he added.

While maintaining that the drivers had been mistaken, Ninh said the toll station had opened its gates to relieve traffic on the crucial road.

As of Tuesday morning, the An Suong – An Lac Toll Station has returned to regular operation.