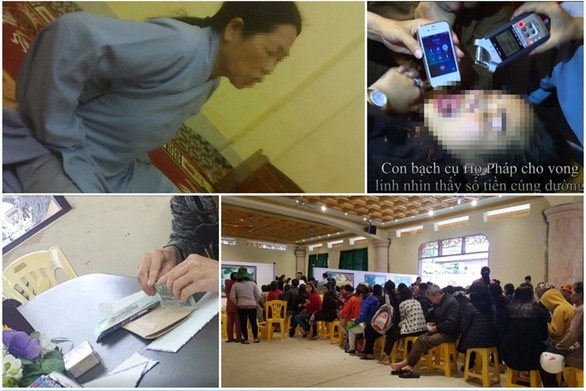 Pagoda in Vietnam under investigation over ‘karma removal’ for a price

A famous pagoda in the northern Vietnamese province of Quang Ninh is under inspection after media reports exposed it for collecting money from followers to perform rituals which it claims remove "bad karma" from one’s previous life.

Three times each month, the Ba Vang Pagoda in Uong Bi City, Quang Ninh holds a grand ceremony for thousands of followers to participate in rituals performed by monks to “summon wandering souls” and “remove bad karma” for those willing to pay for the service, according to a series of investigative reports published by Hanoi-based Lao Dong (Labor) newspaper.

According to the pagoda’s teachings, the illnesses and bad luck that a person encounters in this incarnation are caused by “vengeful spirits” to whom that person was indebted in their previous life.

In a controversial viral video, a Ba Vang Pagoda missionary can be seen telling a young audience that the recent cold-blooded rape and murder of a college student by a group of five men in northern Vietnam was the direct result of the young woman’s bad deeds in her previous life.

She also told them that homosexuality could be “cured” by paying more attention to people of the opposite sex.

In order for the audience members to rid themselves of similar “bad karma," they were asked to pay millions of Vietnamese dong as “merit money” to the pagoda to repay their debts. (VND1 million = US$45)

The pagoda even has a bank account it uses to receive donations electronically and asks donors to text the abbot their information after making a money transfer, according to the pagoda’s official website.

According to Lao Dong, the practice has been going on for years, with the Ba Vang Pagoda raking in more than VND100 billion ($4.33 million) annually.,

The Ba Vang Pagoda, built in the 1700s at an elevation of 340 meters from sea level, is a popular religious attraction in northern Vietnam,

It recently underwent a major renovation that transformed it into one of the biggest Buddhist temple complexes in the country.

Le Thi Hanh, director of Quang Ninh’s Department of Internal Affairs, told Tuoi Tre (Youth) newspaper on Wednesday that a joint delegation of officials from Uong Bi City and Quang Ninh Province would be inspecting the pagoda to verify information about the “karma removal” service reported by the media.

Meanwhile, a Ba Vang Pagoda representative said the same day that pagoda administrators were planning on holding a press conference of their own to provide an official response to recent media reports.

These reports contained some pieces of formation that are “inaccurate," he said without clarifying.

The date and venue of the press conference have not been decided on, he added.