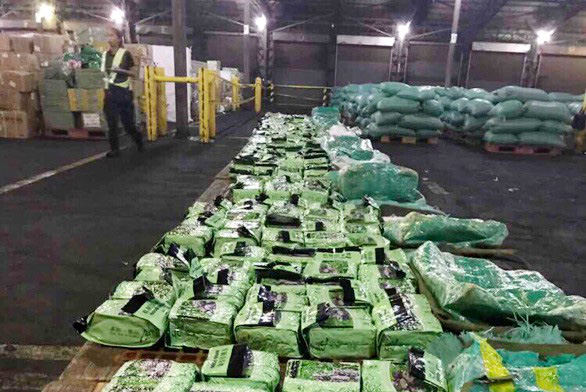 International drug smugglers are increasingly turning to Ho Chi Minh City as a transit hub in the region, said Vietnamese Minister of Public Security To Lam, after authorities busted a Chinese-run drug ring and seized 895 bricks of smuggled heroin from a separate racket in the southern metropolis this week.

Lam was speaking at a ceremony in Ho Chi Minh Ciy on Friday to publicly commend officers who were part of a police task force that brought down the Chinese-led ring.

Ho Chi Minh City is fertile soil for drug-related crimes thanks to it being a commercial and financial hub of Vietnam where trades are busy and road infrastructure is developed, Lam said.

There were more than 23,500 registered drug addicts in the southern metropolis as of late 2018, the highest of any Vietnamese province and city and accounting for over ten percent of drug addicts nationwide.

“Criminals have gone from smuggling a few bags or bricks to a few kilograms of the drugs,” Lam said, adding that rehabilitation is crucial in bringing down narcotics demand in the city.

He stressed the need to punish entertainment establishments and organizers of public events that condone drug use by their customers or participants.

Lam noted how Ho Chi Minh City has emerged as a transit hub for international drug smugglers and requested that authorities increase surveillance to have the activity under control.

Police in the city on Wednesday night discovered two Taiwanese people and a Vietnamese transporting nearly 900 packs of white powder appearing to be heroin, a drug haul Lam said is just “the tip of a much bigger iceberg of drug activities that have yet to be discovered.”

As for the other large-scale drug ring involved Chinese and Vietnamese suspects, the anti-drug division under the Ministry of Public Security on Thursday apprehended China’s Wu He Shan, 57, for his alleged role as leader of the racket, which was caught transporting and trading about 576 kilograms of drugs last week.

According to Minister Lam, around 80 percent of drugs smuggled into Vietnam are bound for a third country, while the remaining 20 percent are meant for domestic sale.

Some transnational drug rings have opened businesses in Vietnam as a front to cover their illicit activities, posing a challenge for police investigators.

For instance, the narcotics in the 576-kg drug haul were first smuggled from Laos via the Bo Y Border Gate in Kon Tum Province in Vietnam’s Central Highlands, according to police investigation.

After the drugs passed through the border gate, the three Vietnamese members were charged with transporting the shipment to Hashan Company in Binh Tan District, Ho Chi Minh City, where Huang and his subordinates would disguise the stimulants as plastic beads, before shipping them to a third country.

Among these measures is increased crackdown on drug criminals who operate along the border between Vietnam and neighbor Laos, a notorious gateway for drugs entering Ho Chi Minh City.

A mechanism for coordination between police forces of Vietnam, Laos and Cambodia have also been established to help fight drug-related crimes near the borders, said Nguyen Ba Dung, deputy director of Kon Tum Province in the Central Highlands region of Vietnam.