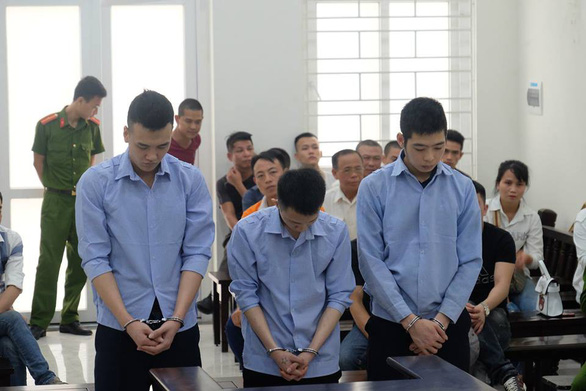 Three dog thieves in Hanoi were sentenced to a total of 79 years for kidnaping and raping two teenagers in early 2018.

Kieu Van Tung, 27, Le Minh Duc, 25, and Le Hoai Nam, 23, were put on trial at the Hanoi People’s Court on Wednesday for raping two teenage girls, one of whom was under 16 years old when the incident took place in January 2018.

Tung, the group’s leader, was sentenced to 28 years in prison, while Duc and Nam were condemned to 25 and 26 years behind bars, respectively.

According to the defendants’ statements, the rape took place in Ba Vi District, Hanoi on the night of January 3, 2018.

Tung, Duc, Nam, and Dat were on two motorcycles as they scouted the neighborhood for dogs.

After stealing two dogs, the gang ran into Dinh Cong Quyen, who was carrying S. and L. on the back of his motorbike.

The dog thieves chased the group and used knives to scare Quyen as they abducted the two girls.

The victims were taken to a plantation in Son Tay Town, where they were raped by the four men.

The indictment confirmed that the defendants had kidnapped, threatened, and sexually assaulted the victims.

After the crime, the men dropped the girls off at a nearby street to find a ride home.

The victims reported the case to police officers the following day.

An investigation was initiated and Tung, Duc, and Nam were eventually apprehended several months after the incident, while Dat has so far evaded police detection.

Officers are still hunting for Dat and plan to try him separately.