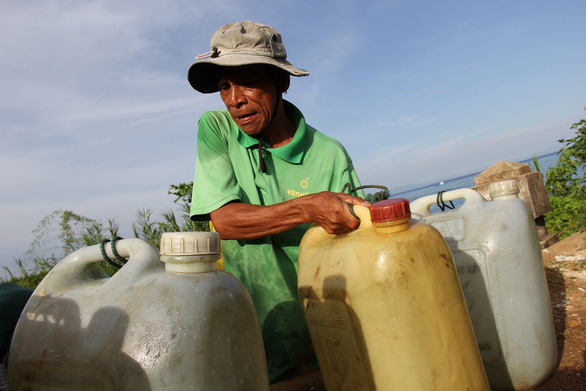 Two provinces in central Vietnam have been struggling against saltwater intrusion, said to possibly be the most severe so far, and its devastating effects over the past weeks.

Central Vietnam has been repeatedly battered by heatwaves and a shortage of rain since the beginning of summer, which resulted in serious drought and saltwater intrusion in many localities.

The most serious effect of saltwater intrusion, when saline water moves into drinking or agricultural water sources, can be seen along the downstream area of the Thu Bon River in Quang Nam Province.

Local farmers have had to make their own embankments to protect their paddy fields.

According to Le Tan Huong, who is in charge of operating an agriculture pump in Duy Phuoc Commune, Duy Xuyen District, the machine has failed to function properly due to the high salinity level in the water.

This can cause severe damage as the pump is the primary water supply for nearly 500 hectares of paddy fields in Duy Xuyen District, Huong stated.

In nearby Dien Ban District, salinity levels in the water source that supplies the local agricultural production has also become 12 to 13 times higher than the normal limits.

Many crop and paddy fields of local farmers have dried out due to the lack of fresh water.

Aside from Thu Bon, the Vinh Dien River has also been impacted by saltwater intrusion, Nguyen Dinh Hai, director of the province’s irrigation management company, said, adding that thousands of hectares of paddy has been deprived of water.

This may be the most serious saltwater intrusion ever recorded along the two waterways, Hai assessed.

In Quang Nam’s touristy city of Hoi An, saline water in the Thu Bon River has resulted in an alarming water shortage in the past two months.

According to Nguyen Hung Linh, chairman of Cam Thanh Commune in Hoi An, nearly 70 percent of residents in the commune have been subject to the short supply of fresh water.

The local tourist sector has consequently suffered as many visitors to Hoi An have been complaining about the lack of water during their trips.

Numerous hotels and homestays in the tourist hub have had to shut down, waiting for the situation to improve.

Complicating the matter, Hoi An’s water utility has been able to operate at only two-thirds of its capacity, according to deputy director Truong Ngoc Hoang Thong.

Thong added that the firm has taken certain measures to cope with the current situation.

Meanwhile, in Quang Ngai Province, which borders Quang Nam to the southeast, people in coastal areas have had to travel a long distance every day to find fresh water for their daily activities.

Nguyen Day, who lives in Binh Hai Commune, Binh Son District, said he has to carry multiple bottles of fresh water from a nearby paddy field back to his home on a daily basis.

“All of the wells in my village have been affected by salt water,” Day explained.

Most residents have to travel deep into the mainland to find fresh water, as salinity has hit most water sources in coastal localities, a local official stated.

On Be (Small) Island off Quang Ngai, large-scale water shortage has forced residents to purchase fresh water from another island at VND325,000 (US$13.9) per cubic meter.

Tourists on the island are only provided with ten liters of water per night.