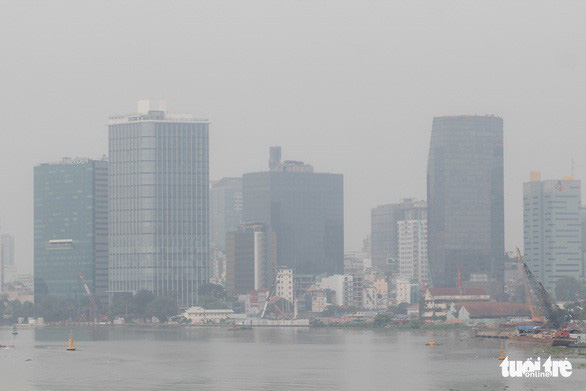 The foggy weather in Ho Chi Minh City over the past week is considered a regular phenomenon that occurs annually, but this year the levels of different air pollutants have significantly increased, according to air quality tests taken by the Department of Natural Resources and Environment.

The environmental monitoring center under the Department of Natural Resources and Environment on Wednesday published an official report on Ho Chi Minh City’s air quality from September 19 and 23, shedding light on the reason behind the perpetual fog that has been blanketing the southern metropolis.

Results at 30 locations across Ho Chi Minh City showed a drastic increase in the concentration of such contaminants as dust, nitrogen dioxide, sulfur dioxide, and carbon monoxide.

These statistics reached their peak on September 20, according to the report.

The amount of fine dust was also measured at 1.9 to 2.2 times higher than the average.

The environmental center attributed the situation to several phenomena, including a tropical convergence strip accompanied by a cold spell, low average temperatures alongside high humidity, and cloudy weather which caused temperature inversion and prevented the pollutants near the Earth’s surface from rising to higher altitudes.

The haze caused by these phenomena is known as photochemical smog, which is a typical occurrence in the southern metropolis during September and October each year.

The environmental monitoring center has reviewed local and international data and ruled out Indonesian forest fires as one of the reasons for the photochemical smog.

As of Thursday morning, Air Quality Index (AQI) in Ho Chi Minh City was recorded at 152, which is considered unhealthy, especially for sensitive demographics, namely children and the elderly, according to Air Visual, a United States-based website.

The level of PM2.5 concentration, or atmospheric particulate matter (PM) that has a diameter of less than 2.5 micrometers, was still higher than the recommended level.

Wearing gauze masks, eyeglasses, and protective clothing is necessary when in direct contact with polluted environments.

It is also recommended to cleanse one’s eyes and nose with physiological saline after being outdoors for extended periods.