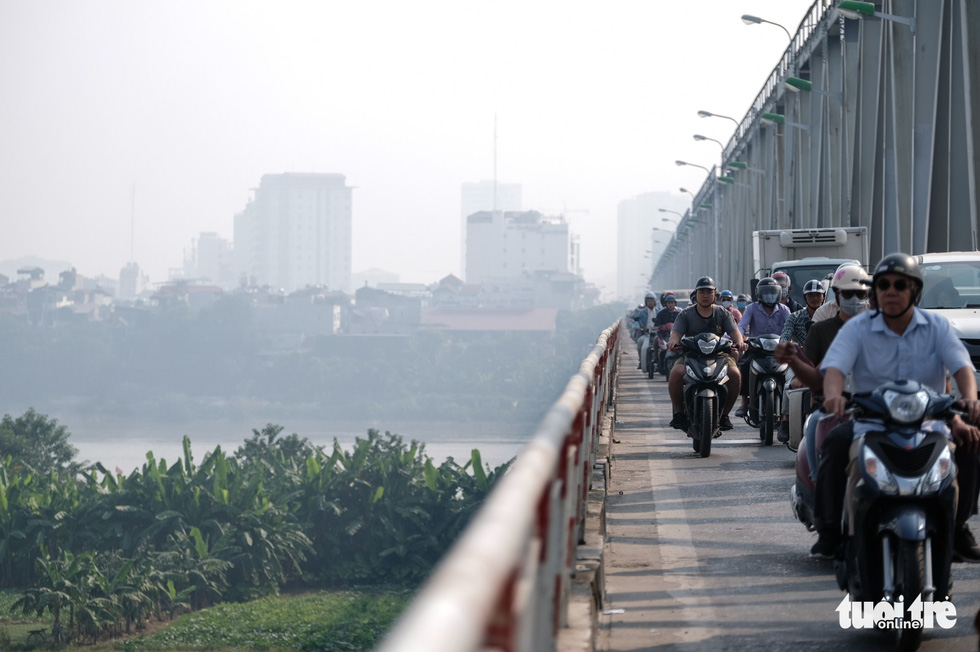 Air quality in Hanoi was the unhealthiest among the world's cities monitored by a pollution-tracking website, as aerial photos show thick smog blanketing the Vietnamese capital on Monday morning.

Air Quality Index (AQI) in Hanoi hit 213 on Monday morning, according to AirVisual, a United States-based website that tracks air quality in cities around the world.

An AQI of 201-300 is deemed “very unhealthy” by AirVisual and may cause “increased aggravation of the heart and lungs.”

The general public “should greatly reduce outdoor exertion” while sensitive groups “should avoid all outdoor activity,” the website advises.

Wearing a pollution mask is encouraged for everyone, AirVisual adds.

Smoggy weather is observed in Hanoi on the morning of September 30, 2019. Video: Nam Tran / Tuoi Tre

No other cities recorded an AQI of 200 or above on Monday morning, making Hanoi the world’s most polluted city at the week’s start with an overall AQI surpassing that of Beijing, China and Bangkok, Thailand.

The AQI formula considers up to six main pollutants - PM2.5, PM10, carbon monoxide, sulfur dioxide, nitrogen dioxide and ground level ozone - and translates them into an “easy-to-understand scale” to clearly represent the health risk posed by ambient air pollution, according to AirVisual.

The index ranges from 0 to 500, where high index values indicate higher levels of air pollution and higher potential for adverse health effects.

In multiple areas with high density of traffic and high-rises such as Cau Giay, Long Bien and Tay Ho Districts in Hanoi, AQI readings remained consistently above 150.

The worsening air pollution has been going on since Thursday last week, when the city’s AQI topped the global chart at 204.

The official causes of such smoggy weather in Hanoi have not been determined.

Last week, authorities in Ho Chi Minh City blamed several phenomena including a tropical convergence strip, a cold spell, low average temperatures, high humidity, and cloudy weather for air pollution that had dogged the southern metropolis for over a week.

The haze caused by these phenomena is known as photochemical smog, which is a typical occurrence in the southern metropolis during September and October each year, the Ho Chi Minh City Department of Natural Resources and Environment said on September 25.