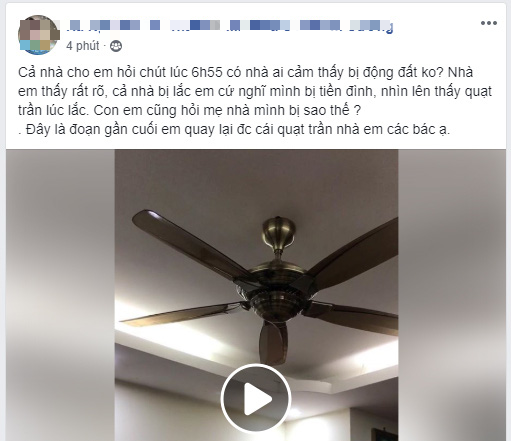 Earthquakes struck near the border of Thailand and Laos on Thursday, sending shockwaves as far as Hanoi and the north-central Vietnamese province of Nghe An.

The United States Geological Survey said a magnitude-6.1 quake hit at a depth of ten kilometers about 92 kilometers northeast of Muang Nan District, the capital district of Nan Province in northern Thailand, at around 6:50 am local time, Reuters reported.

Dr. Nguyen Xuan Anh, president of Vietnam’s Institute of Geophysics, told Tuoi Tre (Youth) newspaper another earthquake was pinpointed at a depth of 38 kilometers in Sayabouly Province, around 200 kilometers from the Lao capital city of Vientiane.

The quakes were felt across northern Thailand and by people in tall buildings as far away as Hanoi, about 600 kilometers northeast of the epicenter.

The Thai meteorological department said there had been no reports of severe damage but officials would inspect historical sites in the region, according to Manager Online website said.

Hoai Le, who lives on the 27th floor at the Times City apartment complex in Hanoi, said she felt extreme dizziness after waking up on Thursday morning.

“Everything in my apartment was shaking,” Le said.

"I thought I was in a dream because I had no idea what was happening."

Many residents in the Vietnamese capital took to social media to share their experiences and seek out explanations.

Similar quakes were felt in the north-central Vietnamese province of Nghe An, about 440 kilometers east of the epicenter.

“I was lying in my bed when the whole apartment began to shake,” Dang Phuong, who lives at an apartment building in Vinh, the capital city of Nghe An, wrote on Facebook.

Dr. Nguyen Hong Phuong, vice-director of the Earthquake Alarm and Tsunami Warning Center under the Institute of Geophysics, was quoted by the Vietnam News Agency as advising residents, especially those living in tall apartment buildings, to stay calm and keep themselves updated on information about the quakes, as there might be aftershocks.

He said the two earthquakes in Laos and Thailand on Thursday morning and a smaller one recorded in Nghe An the day earlier are unrelated despite their coinciding occurrences, the state media reported.